TOM MALLOY The Man Behind The Smile 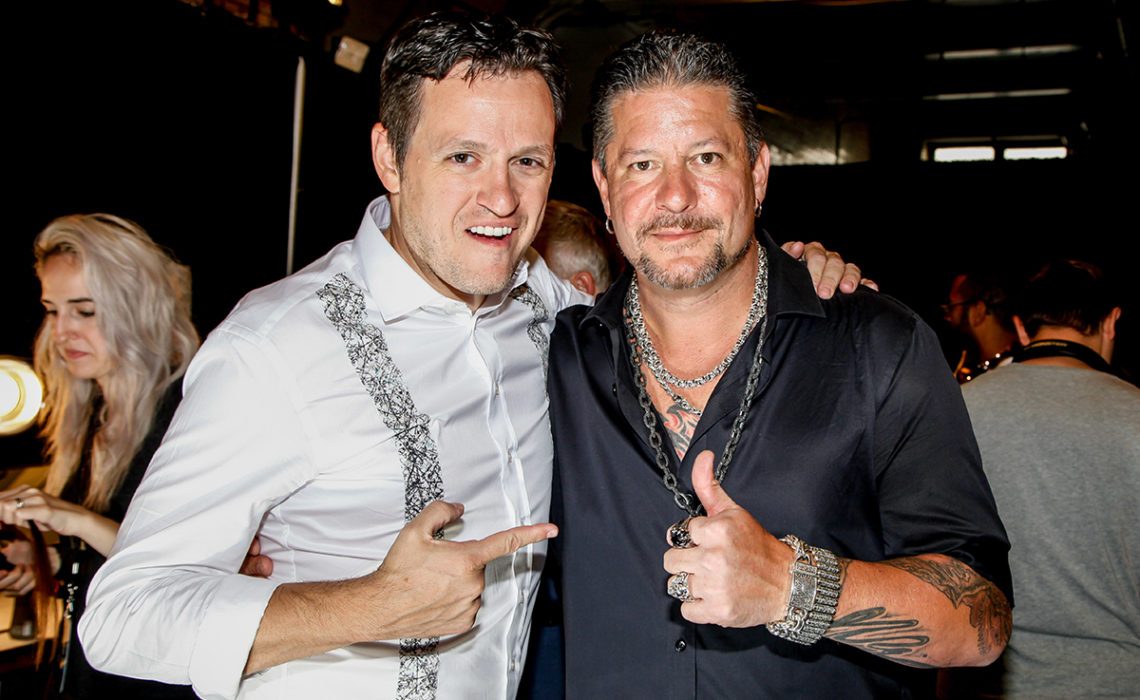 Tom Malloy walks up to me at Starbucks on a sunny day in Webster, NY and the first thing you notice is his handsome smile.

Although he’s a critically acclaimed actor, producer and screenwriter, his happiness is no act.  Tom is relaxed and genuinely joyful as he talks about his life, his career, and most importantly his kids. 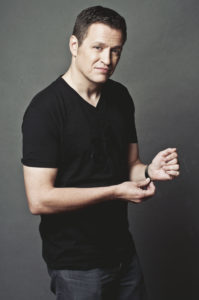 Tom grew up in New Jersey, first taking the stage in Fourth Grade as Captain Hook, “but since kindergarten, I was always the class clown,” he admits.  In High School, he performed in several school musicals.  “I had an instant knack for acting, and I could carry a tune.”

Tom admits he has many friends in Hollywood and many times spends half of each week in LA.   “I commute almost every week and spend 3 days at an apartment in Beverly Hills for work, then I fly home to be with my kids.  I spend about 60% of my time working in Webster, and 40% of my time in California.”

“I am known in the business for being in the ‘fun crowd.’   People in the industry hate to meet other people in show business because everyone is always asking them to give them a job,” he says.  “Sure I love to talk about film, but you won’t find me asking anyone for a job.  I am just there to have a good time.” 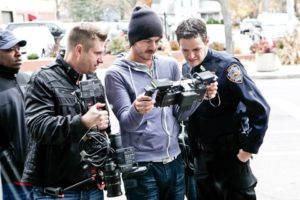 Tom himself wowed Hollywood with his stunning turn in the indie-cult favorite Gravesend in 1998, which was produced by Oliver Stone.  In the movie, four young men spend their Saturday night trying to come up with the money to cover up the accidental death of a family member. As the night goes on, the tensions between the four rise and the situation becomes all the more desperate.

“I don’t think I even got paid for that role,” he laughs.  “But I can forever say I worked with Oliver Stone.”

One reason Tom doesn’t have to ask for jobs around Hollywood is because he’s also written more than 30 screenplays, 23 of which have been optioned, sold, or produced into movies, and that often allows him to take one of the parts.

In 2008, Tom wrote and produced the Alphabet Killer, based on the true story of the double initial killings in Rochester, NY.    Eliza Dushku and Timothy Hutton starred in the film, which was shot in Rochester. Tom played the role of Officer Steven Harper.

“When I write screenplays, I don’t actually write a part specifically for me,” he said.   “I focus on writing a great character, and later try to assess if I’d be good in a role.”

“I really only had like 6-8 lines with IceT and Richard Belzer on Law and Order SVU.  It was a small thing, but I still get checks for that role because that show runs non-stop on cable.  I just gone one for $300, but sometimes the checks are for less than the cost of the stamp to mail them.”

“What I would really like people to check out is my show called Midtown.  It is based on the true cop stories of former NYPD cop turned improv comedian Scott Baker and the first two seasons are available on Amazon.”   The series features real cop banter, related to being a cop in the NYPD. All of the dialogue is unscripted, and relies only on the improvisational comedy talents of Scott and Tom.

“We made two seasons on a budget of zero dollars.  Half the reviews say it looks cheap.  The other half says it’s the funniest show ever.  And it was all shot in Rochester,” Tom said.

He also has a part in the movie Fair Haven as Reverend Thomas, an indie film that was in theatres in March and will be featured on Showtime this month.   It was shot in Bloomfield, NY.

“Fair Haven is about a young man returns to his family farm, after a long stay in gay conversion therapy.  He is torn between the expectations of his emotionally distant father, and the memories of a past, loving relationship,” he said.  “It’s a beautiful story.  Film Independent called it one of the top 10 must watch indies of the year.”

Tom has been influential in getting work shot in Rochester.  He wrote a book called Bankroll: A New Approach to Financing Feature Films about raising independent financing to make movies.  It is considered the gold standard of indie film financing instruction.  A second edition came out in 2012.   He himself has raised more than 25 million dollars to produce films.

He says he loves Rochester film-wise, because there are good people here who want to be in the business.  A bonus is, filming in the area requires no permits.

“You literally can go and shoot anywhere you want and nobody bothers you about permits and unions.  I would get ticketed or arrested in L.A. for the work I do here (if I had no permits),” he says.  “It’s also nice because it is removed from the industry.   I love my kids, playing poker, swing dancing and practicing jiu-jitsu at Shogun Martial Arts in Webster four days a week.  So I like to talk about things other than movies, which is a lot easier to do outside of Los Angeles!  Sometimes I just tell people here I am in the ‘Export Business.’   Then I don’t have to talk about my job.”

If all that talent wasn’t enough, Tom is a ballroom dancer.  He has been trained in West Coast Swing by Robert Royston, the 12 Time U.S. Open Champion. Tom wrote and starred in a dance film/romantic comedy called Love N’ Dancing (2009), which also starred Billy Zane and Betty White.

Of course, I had to ask what Betty White is like in person.  Tom responded,  “Betty was the greatest.  She was like everyone’s grandmother.  So sweet and funny.”

When asked about who he would most like to work with, Tom says “A-list comedians, like Will Ferrell or Steve Carrell, or with an A-List dramatic actor like Sean Penn.  My desire there is so that I can show them on-screen that I am on their level, or better,” he adds with a laugh.

When asked how he measures success, Tom gets serious for the first time.  “That’s a tough question because there is a trap you could fall into where you are always thinking about the destination, when the reality is life is about enjoying the journey.

“For me, I guess success is that I have worked in the film business for 16 years.  But I also don’t take life too seriously.  I want people to look back on my life one day and say ‘he had fun.’ ”

Although he will banter all day about the movie business, Tom is most happy talking about his children, Ella, 12, and Tyler, 10, who go to school in Webster.  “My kids are incredible.  I have so much fun with them.  I like to enjoy everything I do with them and approach being a dad as a chance to be a big kid. I hope one day they look back and say ‘dad never grew up.’”

Toms next big film role is starring in the movie #Screamers.  It will be released to theatres sometime this fall (you can see the trailer at www.screamersthemovie.com).

“I was in line for the haunted hayride in Williamson in October 2015 with my daughter and I was watching everyone have so much fun and I immediately felt this energy and posted on Facebook, ‘I just decided, right now, I want to make another horror movie!  Who’s in?’ 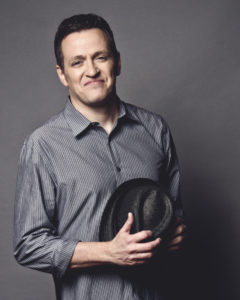 “It  got the most likes and comments of any post I ever did.  One month later, I had financing, and we were shooting in January.  The film is so great.  I can’t go into details about the deal, but I am keeping my fingers crossed it all gets signed and that there will be a major theatrical deal in place for a fall release.”

Addicted to HorrorMovies has pre-screened the film and wrote “this one comes as an enormous surprise, and it’s a welcomed enormous surprise, for sure. I enjoyed the hell out of #Screamers, and I’m hoping a larger audience sees this one soon, as it’s more than worth a look, it’s perfectly chilling and strikes all the right chords.”

“I am so excited about this film,” he says.  “This is my first project that as an actor/writer/producer where the film came out exactly as I envisioned it.  It really makes me excited about my future films.”

With that, the interview came to an end as Tom had to go pack for an 11-day trip to the Cannes Film Festival.  “I’m selling films during the day to distributors (Tom co-owns a distribution company called Glass House Distribution), then I go to see films on the red carpet, and then go to parties all night!”

As exciting as walking the red carpet sounds, he says his favorite part of the trip will be returning to Webster to see his kids Ella and Tyler.