If you ask people what makes a fulfilling life, you’ll often get a litany of bright and shiny ideas – fortune, popularity, travel, fancy cars, etc. Indeed, these days, we strive to have it all. But what happens when the shine begins to rust? If you ask Greg Polisseni, a man who has everything that most folks would define as markers of success, his parameters for living a fulfilled life are a little different – humble, even:

“It’s getting to be myself every day and do the things I love, surrounded by the people that love me. That’s what it’s all about.” 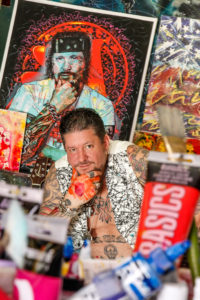 Driving up his winding driveway lined with Americana-inspired statues, past his impressive home to his art studio, I wasn’t expecting Greg to have such a down-to-earth mindset. If you’re from Rochester, it’s likely you already know Greg Polisseni’s name – and if not, you surely know his parents, who are two prominent businesspeople and philanthropists that are best known for their hand in Paychex.

Greg is also an abstract artist, a producer, a fashion designer, and philanthropist. His works have graced the runways of New York Fashion Week, the halls of the Pentagon and the White House, and the silver screens of Hollywood.

But minutes into meeting him, he tells me that despite his notoriety, not many people really know who he is. 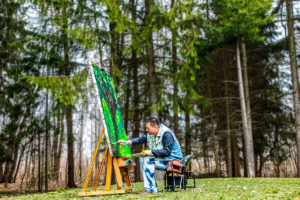 “I keep to myself most of the time,” Greg tells me as he leads me around the main area of his studio. The studio, once a multiple-car garage, is expansive. The walls and floor are unassuming shades of white on concrete, but what really strikes me is the sheer volume of artwork. Canvas upon canvases are stacked and scattered throughout the room, splashed with bright, colorful paint. A large majority of the works are abstract, but I notice a number of captivating realist paintings: a beach scene with palm trees swaying lightly in the breeze, a human eye depicted in jarring detail. I mosey over to the table and I see something entirely different from the rest; it’s a colorful abstract painting, with an actual guitar fixed onto the canvas.

“This is for Jim Kelly’s charity tonight over in Buffalo,” he tells me. “I make an original piece of artwork to be auctioned for each of his fundraisers. I like this one so much I might bid for it myself.” He laughs.

Already, among the starkness of my assumptions, a picture of Greg Polisseni is starting to take shape, in surprising, vibrant tones and abstract brush strokes. He leads me upstairs.

As I step into the lounge upstairs, another thing is becoming clear: Greg isn’t just a designer of beautiful things; he’s the designer of his own life. The rich, oak room spoke miles about Greg’s interests and hobbies: sports memorabilia, a full bar, arcade games and a comfortable lounging area. 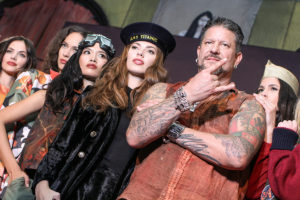 As we get talking, I start asking Greg my typical litany of interview questions. I’m blessed to meet and interview a lot of people, and I’m always interested in hearing about their achievements and how they’ve gotten to where they are today. But it’s hard with Greg, and I realize that’s because he’s not the kind of guy to keep a laundry list of his achievements on hand. So instead, we start at the beginning.

Greg was born the youngest of four in Rochester. As his parents continued to build Paychex, they moved to Ohio to open the company’s Cincinnati branch. Paychex rapidly expanded, and with the boom the family moved back to Rochester in 1980.

Despite his parents’ wild success, Greg had a relatively normal childhood. But when he was 13, his family experience immense tragedy when his 18-year old sister passed away in a car accident. The loss hit Greg hard, and he began to use drawing as a means of comfort.

“I was the youngest of four and my sister was the closest in age to me so losing her was really hard, you know? I was alone much of the time and really kept to myself. Drawing really helped me through that.”

Greg  soon realized that he had a passion and talent for art. In high school, Greg would paint his creations onto clothing, and soon enough peers were asking Greg to make custom pieces for them. It was clear that Greg was an artist, and he hoped to pursue his passion as a career.

But life had different plans for him. Instead, he followed the path of his family and entered the corporate world after graduating from St. Bonaventure University.

While he saw great success in his business, it made him realize how passionate he was for the entertainment industry. So in 1997, Greg started marketing and promoting music groups in Western NY, and eventually opened up a venue in Buffalo.

In 2004, Greg delved even further into the entertainment industry, producing his first film, “The ABC Killer,” a thriller based on a true-story that took place in Rochester. He went on to work on several other projects, all while helping his family with the business.

But after a major life event in 2008, Greg realized that he had spent a lot of time living for others and not pursuing his own dreams.

While he saw great success in the corporate world and in his film endeavors, he knew that art had always been his first passion. So Greg picked up a canvas, and he started to create once more.

“My first painting was an abstract, of a set of palm trees on a beach,” he said. “At the time it was just an outlet for me. It made me feel good.”

But soon enough, Greg began showing his work at galleries around Los Angeles, and his work was extremely well received. People started to order paintings, and Greg’s new life of creative expression began.

“I had a lot of things holding me back for a while,” Greg said. “I was always trying to live up to the expectations of others. But one day I just woke up and I realized that I’m the only person that gets to live my life.”

It was time to show the world who Greg Polisseni really was.

As Greg continued to create art, he started transferring his creations onto his clothing like he did in high school and wore the pieces to art events.

“At one particular gallery, a friend came up to me and said: ‘Dude, you have to sell these, they would be a hit in LA.”

Just like that, Greg went into fashion design, and started his brand, Artistix. For two years, Artistix was based out of LA. But now, the fashionwear company is based in NYC, where Greg works with Andy Hilfiger to create avant-garde styles that subvert traditional silhouettes, garment structures, and design.

“With Artistix, you’re not just wearing a piece of clothing,” said Greg. “You’re wearing art, something that came from somebody’s soul.”

In fact, Greg treats his fashion line like he does his art. Like many artists, inspiration will strike for him at any time, whether it be the woods or in his studio.

“I let the colors and canvas talk to me,” he tells me.

Along with his illustrious career, Greg is also a dedicated philanthropist, using his creative talent and means to give back to the community.

“I get to do whatever I want creatively for causes, for people to make them smile. There’s nothing better than that.”

By his side, he has his friends, family, and fiancée, who provide him with the support and love that fills his own world with vibrancy. In fact, it’s why he still lives in Rochester.

“My family is here. My good friends are here. That’s more important to me than work, art or anything like that.”

And with a career and life like Greg’s, one can’t help but ask what he’s learned throughout his life, amidst the struggle, the hardship, and the doubt. His answer, however, is simple: be yourself.

“Be who you want to be. If you can’t live for yourself and you live for other people, you’re not living life. We’ve got 365 days a year. Those years can go by quick. And if you’re too busy doing shit that you don’t want to do, it’s just a matter of time that you’re going to look back and regret not doing what you want. Because ultimately it comes down to you.”

Because ultimately, in a world where we’re all looking for a sense of belonging, Greg believes that the only person that can create space for you in this world, is yourself.

“For me, I struggled most of my life trying to find where I belonged. I kept listening to other people. There’s no self-satisfaction in that. So, I did my own self-analysis of what my skillset is. What are the gifts that god gave me and how can I put that to use? Don’t be pushed around and don’t be pressured to do things that you don’t want to do as a career.”