JUSTIN COGSWELL: A Marine/Founder of Operation Build Up

There is no one definition of success.  What feels freeing to one person can feel suffocating to another. Some value the ability to do meaningful work while others focus on more concrete results. 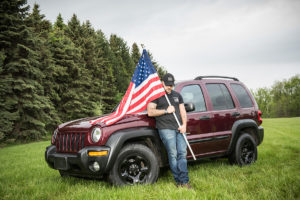 What does the word success mean to you, and how do you measure ii? We all have different definitions of success, diverse goals and various ways of achieving those goals.

And then there is Justin Cogwell; the former Marine and founder of Operation Build Up. His definition was by far the most telling and revealing– success is determined by the impact you have on others.

Justin was living in Hartford, CT when September 11th occurred. He wanted to seek vengeance for our country and joined the United States Marine Corp.  Upon his return to civilian life, a time he describes as “my spider hole”, he did not have the desire to interact with the world and preferred keeping to himself. When he was able to create a stable income for himself as a day trader, he tried to ignite satisfaction by purchasing nice cars and fancy things, but they never provided the stimulation he thought they would. After reading a please help ad on craigslist from a struggling veteran that needed a car, purchasing a car and fixing it for him, the rush that he felt when witnessing the disbelief in the fellow veterans eyes got Justin hooked.  It was what he had been searching for.

He started Operation Build Up, a non profit last year when he realized that there was a major gap between available assistance for struggling veterans and the public perception of assistance. Yes, there are programs offering needed assistance, most of which have requirements based on percentage of disability, discharge classifications, discharge dates, and much more criteria that further hinder positive reinforcement. The goal of Operation Build Up is to offer struggling veterans the vital tools needed in a civilian lifestyle.  Many people do not realize how difficult of an adjustment it can be to move from military life into civilian life for many veterans. Most of our heroic veterans return home from service with just enough personal belongings to fit in their vehicles. Along with skill-sets that are strictly combat related.  It is our belief with these tools  our brave, dedicated veterans would flourish.

The statistics are alarming.  There are 1.4 million veterans at risk of homelessness, female veterans are four times more likely to become homeless than male veterans.  In addition, over 120,000 veterans have committed suicide since 2001, 22 per day, more than double the number of casualties during the entire Vietnam conflict. After losing many military friends to suicide, Justin refused to be one of the many that said “I wish I could do something about it, that’s how the VA does it, or the government does that. Last time I checked it was We the People, there comes a time when we just have to take things into our own hands. This is one of those times.” 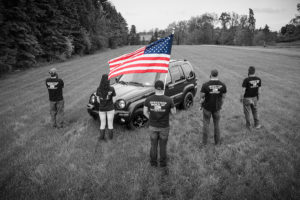 It should come as no surprise that Justin sees himself as just a face in the crowd.  To have a real impact he needs to create other leaders with the same passion and skills. He enthusiastically states that Operation Build Up is a movement, a way of life. It is running back into enemy fire to save a friend. It is the concept that even though you maybe separated from your serving unit and your best  friend may have returned home to Alabama, Virginia, etc. There still are many right here in our own community in the same situation. If we can bring back that “I’ve Got Your Six” mentality within a civilian atmosphere than serving the military of today will become the CEO’s of tomorrow.  Their lives, futures, and success are our only concern. No self glorification desired, just impact.

When asked what Justin’s biggest inspirations for his life and career, he once again provided a remarkable answer. During my life I have witnessed the battle between good and evil play out in front of me in many different formats. I have a strong belief that this battle is apparent everyday right in front of us. I would like to live the rest of my life with the understanding that I can bring light rather than darkness.

His biggest accomplishments are becoming a marine and a father. Semper Fidelis-staying faithful to my brothers and sisters when it’s easier to walk away. I never wanted to be a rich man. I prefer to be a man of substance, comfortable and loved. After all , in your darkest moments hugging a pile of money never did anything for anyone.

Leading a non-profit comes with its share of difficulties. There is no revenue model, Justin shared with us, so your advancement is determined by the donations received from the public which can be spotty and inconsistent. We are living in a society where everyone is shaking a can for one cause or another, many placing ten cents on the dollar or less to the actual cause, and Go Fund Me accounts for everything under the sun. So the public’s past abuse by nonprofits or the constant nagging for donations by others drowns out real efforts, which is understandable. Up to this point, I have dedicated half of my six figure income into the initiative, without this we wouldn’t even have a website to this point.

If you know a veteran going through hard times, or for more information about Operation Build Up you can visit their website at:  www.operationbuildup.com