On life….
What is your purpose in life? What are your goals in life? How do you think your life is meant to be? How do you want to be remembered? My Name is Quentin Marozzi and I am a Professional Mixed Martial Arts Fighter(MMA) here to talk to you about my life… 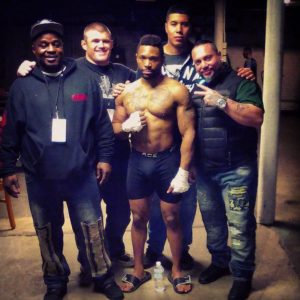 My story…My Legacy
I grew up in a little town outside of Rochester NY, called Caledonia. It’s a little town, very quiet, where everybody knows everybody. You know how that goes. I lived with my loving mother Mandy Marozzi, my step father Richard, my brother Jonathanand my sister Myia. I was the oldest of the 3 of us and the most stubborn, hard headed and difficult one to deal with.

My mother was diagnosed with Sickle-O Cell and was in and out of the hospital a lot when she was younger. Transfusions every week, doctors saying she would not live past 18, but she proved them wrong. Doctors said “You could never have kids”. she proved them wrong again.

My mom opened two day cares and a latch key program for kids at my school whose parents had to work before and after school and could not afford daycare. She was very dedicated. No excuses got in her way. She was also was also a speaker and treasurer of a local church. The fight in her was unreal. She was very inspiring and it was truly something one had to witness to understand. She knew her calling in life but knew her life was limited, so she was very hard on my brother and I to become men at an early age.

As life carried on, I lost my mother when I was only 12. This was the beginning of a very dark time for me. Something I did not realize and could not understand at the time was how much this would impact me for the rest of my life. I became numb to the world. The only things I cared about were my brother and sister and very few remote friends. I used fighting and partying as my outlet. The only positive outlet I used was sports. I Became very good as a running back in football, which drew a lot attention from various colleges to look at me. I also ran track( 4 by 1, 4 by 4, 100,200) and I was fastest in the state at one time, Unfortunately I never took it seriously.

I became the leader of my family at age 18 when my father went to prison for selling drugs. This hardened my heart towards him due to the fact he was not really a father figure in the first place and now at this critical time in my life was gone from his kids’ lives.

Life moved on as I grew older. I saw a lot life differently than most people. I had a different “perspective”. I was driven. I had determination.

My brother became a Sheriff; my sister became an educated driven women staying in school and working with the mentally challenged and Helping with CPS. And for me.

And for me, well I could not figure out what I wanted to do in life. I knew I wanted a family and to be a good father. I knew I wanted to live above just an average life style. I knew my character would get bored with certain jobs due to the fact of my work history and nothing ever keeping me interested. Then I was told from a very good friend of mine Samantha L. that her father was a former kick boxing world champion and I should talk to him about working out. She said that because she knew of my history in life and knew I would love the sport, it would be perfect for me to get out some of my anger. 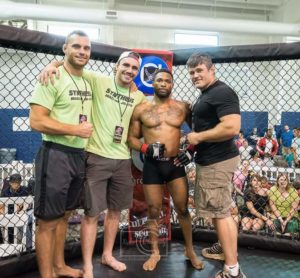 I went to Dan where he began teaching me the ins and outs of kickboxing. Shortly after, he got me my first kickboxing match. I was nervous that I haven’t felt the feeling of completion like this ever in my life. I was matched up with a guy who was 15 pounds bigger than me because original opponent dropped out. I had the option to not fight but I wanted to, the drive in me wanted to fight. Iwanted to feel the energy and rush again. I felt like I was meant to do this.

Before the fight started my coach put my mouth piece in and said “This is your time.This is your night. You’re a fighter all around not just in this ring, but in life. It’s in your blood. Now go out there and show the world you know what to do.” The bell rang and everything around me went dark other than this 6’3” man in front of me. I moved forward knowing I had a right hand that could hurt anyone if landed right. He threw a roundhouse kick to my leg and as soon as I felt it I instantly started throwing nothing but right hands. Over and over and over, where ever I could hit him, till I saw him drop his hand. I threw one right to his jaw… my first fight… my first knockout. At this very moment, I knew what I wanted to do for a living. Coach Dan then got me to a 9-2 record as an amateur kickboxer and took me around the world with him. We faught inRomania, Amsterdam, Transylvania … this was a real eye opener for me. 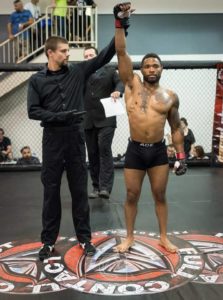 I was 22 now. MMA was the next big thing coming up and I wanted in. My coach Dan retired from training due to surgery, so training with him came to a halt. I then joined a different gym trying to find my place, but none took me seriously. They said I lacked the experience and the training to fight MMA. I refused to believe that. Then one day two of my good

friends Judeh abid and Mahmound abid, both brothers who had looked out for me like their little brother, came to me and said where going to amateur MMA fight and said they believed I could be great. They said that I would be unstoppable at 145 pounds. I laughed. Not because of the fighting, but because I have never weighed 145 since the 6th grade. But I told them “let’s start out at 155 first and go from there. That’s only 20 pounds I had to lose.

Months later it was fight time. Talk about being nervous as hell! The place was packed; everyone I knew was in the venue waiting to see what I had to bring to the MMA world. I had people that supported me there, but also a lot of people that thought I was not meant for this sport.

As I was warming up I told myself “whatever happens leave it all in the cage.” Those were the words Dan would tell me before walking into every fight.

Security came and said, “it time Marozzi.” I gave my coaches a hug and ran in the cage feeling alive. Feeling like this was my time… my calling… the announcer then called my opponent. A guy who had well over 10 fights off the book. I did not care. It was about to be a fight in my mind, so let’s do this. The bell rang and we went right at it throwing punches, kicks and it was exactly my type of fight. Then I clinched him and started doing dirty boxing which is what I came from. He picked me up and got me air born and a took me down mounting me and throwing punches.

This is a new game to me now. Stand ing up was my strong point. I was not used to this type of fighting. I was able to use my strength and technique and reverse him, but he was able to counter it and put me in a submission called an arm bar, ending the fight. Talk about a fighter learning his lesson the hard way.

After the fight, I got some positive feedback and a lot of not so positive feedback. This put me in a depressed state. I did not want to see anyone, or talk to anyone. This effected the relationship I was in too. I was totally numb just like when I lost my mother. Looking in the mirror at myself was hard and some days I could not do it. Until one day I thought about my mother that fought for every second of her life. My mother who fought and overcame tons of obstacles. I realized then that this is just a test and I can do this just like my mother did.

Something then took over and I got the attitude and said “lets prove everyone wrong that I can be the best around here” and that my fight was a learning experience. I had very few friends at the time that believed in me. My family is who gave me courage and inspiration to keep going. I was so serious about getting back at it I knew nobody was going to stop me. I was training every day like it was my last. I then got my confidence back and took a fight and won with submission that time.

Then I took another fight and won with submission and at the end of my amateur career I was 8-3 . I made national T.V twice for my knock-outs and was offered to fight pro a year before I turned 28. 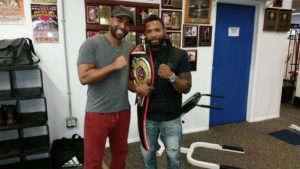 I was blessed to go train with Desmond Green, an active UFC fighter along with Anthony Jonson and a ton of other great UFC and Belator fighters. All of this happened because I didn’t listen to the negativity and I stayed positive and stood strong. I wanted to be a great role model for my little ones and make my family and proud.

Believe in yourself and your success and make it happen. I am living proof. Live your life how you want to live it and never go off the course of what you truly feel you want to do. Life gives us opportunities and it’s our job to recognize them and take them. I believe my life is a glimmer of hope when people don’t believe in what they are capable of doing and chasing after their dreams. Don’t lose your drive, you’re ambition, your dedication for whatever you want to do. This is your life; this is your legacy. You leave the world how you want to be remembered.

This is dedicated to Dick Marozzi