A Q&A With Joey Arena

A Q & A WITH CREATIVE STYLIST, ROCK STAR AND OVERALL GOOD GUY…JOEY ARENA

ROCHESTER WOMAN ONLINE:Tell Rochester Woman about your childhood. Where did you grow up? Any special childhood memories? 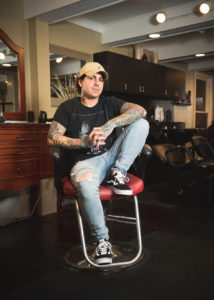 JOEY ARENA:I was born and raised in Rochester New York. Other than going to a city school for second grade, I spent most of my childhood and school years in Penfield. I was raised by a single mother, and we spent our first year living in my grandmother’s house. I’m very close with my grandparents and consider them to be second parents. I grew up in the arts, music, skateboarding/ snowboarding and the sports’ world.

JOEY ARENA: I’ve loved music since before I can remember. I have vivid memories of my mom and me and our little apartment and her playing Bruce Springsteen. I must’ve been two or three and have no idea how I can recall that. She raised me on all of the greats. Then I was obsessed with Michael Jackson when I was about 5+. I had to be bribed to walk the aisle in her wedding with specifically his “BAD” tape.

I was so shy growing up but easily bribable, I suppose. I loved music from Greenday’s “Dookie” tape to Coolio. I loved it all. What got me into playing music was jumping on the couch and playing a mean air guitar to Nirvana in 1994. That was the beginning of it all. Everything about them is what made me pick up my first guitar.

ROCHESTER WOMAN ONLINE Who were your big influences in life?

JOEY ARENA: My mom. She doesn’t know it, but I’ve watched her raise me and three other siblings pretty much on her own. I was the oldest and saw it all. She would give us the shirt off her back and taught us respect. She made sure we had a roof over our heads and food in our bellies. We didn’t have it easy, but she did her best with what she had. I remember back in high school, a time she gave my brother and me a $20 bill each–a rare occasion– to spend at the mall. I felt too guilty accepting it because I know she could’ve used it on anything more important. So, later that night I slipped the $20 back in her purse. Moral of it all, she’s the strongest, most giving, loving, forgiving and independent person I know. She set the bar high, and I hope to be half of the person she is. 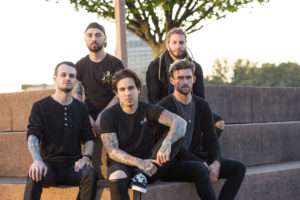 ROCHESTER WOMAN ONLINE Who were/are your biggest influences in music?

JOEY ARENA: I was 15 years old and for my birthday my uncle Pete took me to see Papa Roach at Waterstreet Music Hall. Definitely the youngest and smallest person there and after mosh pits broke out, I was picked up and placed on the bar and Coby (singer) waved and gave me a shout out–one of the greatest feelings for a 15-year-old kid.

ROCHESTER WOMAN ONLINE When did you begin touring?

JOEY ARENA: I graduated High School at 17 and a few months later, hit the road with my band at the time, “They Sleep They Dream.” It was a couple months run consisting of half Canada and half U.S. dates.

ROCHESTER WOMAN ONLINE Give your definition of a musician and a rock star. 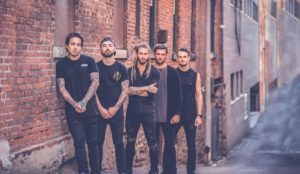 JOEY ARENA: A musician is someone who can’t live without an instrument in [his/her] hands and/or music in their soul, no matter what age, someone who listens to music differently than most.

Musicians do it for the genuine love of it. They break down and appreciate all structures, messages and genres. You respect the craft.

A “rock star” is someone who does it for the attention, gimmicks and popularity that come with it. Most likely a rock star puts the instrument down and won’t touch it until the next show. There isn’t much appreciation for the art, I suppose.

ROCHESTER WOMAN ONLINE What’s the best thing about being a travelling musician, what’s the worst?

The worst would be getting food poisoning or the van breaking down in the mountains of West Virginia during a blizzard.

ROCHESTER WOMAN ONLINE You’re in a committed relationship. How does that work when you’re besieged by female fans?

JOEY ARENA: I keep everything formal and professional, as I do [with my work as a hair stylist]. I don’t let it go to my head, and I appreciate their/the fans support. They are the key to our success. I usually have to give a pep talk when the relationship is first starting out but they understand it’s part of the show.

ROCHESTER WOMAN ONLINE Tells us about Youngbloods..genre of music, etc.

JOEY ARENA: Young Bloods was a pop rock band that had done many great things and gave me some of the best learning experiences. Our headlong shows were selling out the hall side of Waterstreet. In 2012, our album, Rebirth debuted on the Billboard charts and climbed for about three months. We toured and played with many great national artists from Yellowcard, Eve 6 and New Found Glory to The Ataris, Downplay (Starset) and Ryan Cabrera. We were a young band, but we had too many people in the industry trying to mold us. Eventually it reflected in our writing ,and I was no longer having fun.

ROCHESTER WOMAN ONLINE You have a new band now. What’s its name and how is it different from earlier bands?

JOEY ARENA: The name is “Ovtlier” pronounced “Outlier”. It’s different in a sense that it’s the first band that I have ever created from the ground up, pretty much by myself. I traveled to Cleveland over the course of a year and half and wrote and recorded the whole album in a studio apartment with a friend of mine, Evan McKeever. I found members by presenting the album to them so they already knew what type of sound and direction I was going for. You then can find like-minded and driven individuals a lot easier, so I’ve learned.

ROCHESTER WOMAN ONLINEWhen you’re not working with your music, what kind of work do you do?

JOEY ARENA: After having a construction business for many years, I am a full time hairstylist.