When you have someone who focuses on honesty and reliability, you have met Vincenzo Scollo, who goes by Enzo to many. I had the pleasure to chat with Enzo about how he has become one of the most successful Allstate Insurance agencies in the Rochester area and how he has built his business. He has been with Allstate for over 17 years and has worn many hats in the company. His experience has allowed him to not only understand the ins – and – outs of insurance, but to also serve hundreds of families regarding their protection needs, such as family, home, car, boat and much more.

When I was trying to schedule a time to get to talk with Enzo he was actually sitting at the airport about to board a plane to head back to Italy to visit his mother. But being who he is, he made sure that we had a set time to talk once he landed and was settled. A couple days later I was able to reach him, where of course I was sitting in Rochester where it was raining and cold, and he had just come back to the house from the beach in beautiful Sicily to take my call. Was I a bit jealous, maybe a little!

Enzo came to the United States at age 24 with a purpose to excel in his college education. He learned English and attended RIT where he graduated with a degree in International Business Marketing. He decided to go back to Italy and landed a job with a company called National Corporation that sold scanners and printers and was in their marketing department. He was there for 5 months when he decided he wanted to come back to the United States. He started to then get involved in the financial business and worked with a company called Pam Mutual Equity Services, which helped families plan for their future, such as retirement, college education, investing etc. He was working with them for 5 years and in 1995 was given the opportunity to own his own business and run his own Allstate Company. 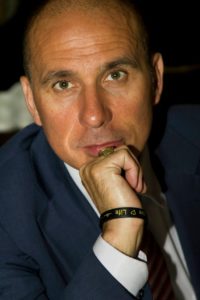 In the midst of all of this, Enzo married his love Robyn who he talks so passionately about. They have two amazing children, a son named Luca (20) and Eminuela (19) who are both in college. Luca is at RIT studying Mechanical Engineering and Eminuela is at Geneseo studying Psychology.

With a very successful insurance agency Enzo also stays busy within the community. He grew up in Italy playing soccer, and still does to this date, participating in many organized leagues in the Rochester area. He is also the Board of Director for the Italian American Sports Association, as well as the Chairman of the Charitable Committee. Besides the committee being very involved in the community, one thing Enzo was very proud of was that they sponsor 2 scholarships a year for $2,000 each. He is the past president of the Fairport Rotary Club and is still an active member. I told him he was so busy! His response; “I would not have it any other way.”

What makes Enzo so successful? His motto; “to treat people how you want to be treated. Put people’s interest first before you put your own interest. This has been my motto for the past 25 years.” He expressed that his main job is to help people, and to pay it forward.

What makes a successful entrepreneur I asked Enzo; and he answered firmly that it is his staff. The better they are the better you are. “Treat your own staff as family, they are the ones that make me who I am,” he explained. His success; he explains is to have the right people in the right places. What motivates this entrepreneur? Knowing that what he does helps people. “I am a problem solver, whether it’s a financial issue or a family issue or a work related issue,” Enzo shared. He is a person that gets things done. He also said what motivates him are his kids and if they are doing well he knows he is doing a good job and that constantly motivates him! You don’t really realize how your kids pick up on what you are doing as they are becoming young adults. “Wow, this is working,” as he mentions about how his kids follow in his footsteps on doing well.

You hear in Enzo’s voice how he lights up talking about his beautiful wife Robyn; who he attributes too much of his success. They have been married for 20 years and as Enzo says; “she is the greatest partner.” You need a supportive partner, and that his been one of his biggest success is having her by his side and supporting each other. 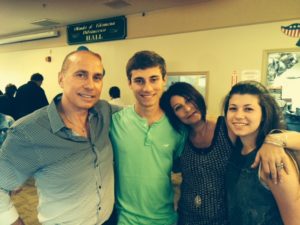 Of course I had to ask what he loves about living in Rochester….”well I can’t say the weather;” as he laughs. He did say Rochester is a hidden gem. Filled with lots of culture and diversity. He called Rochester a “diverse playground!” He may not like the cold; but he does love the 4 seasons. Being born and raised in Italy they only had one season…HOTT, and he was not used to the changes. But now loves it all, and tries to enjoy each season. He may not ski a lot but give him a soccer ball and he is the happiest. Enzo calls himself a “soccer junkie”! He has been playing since he was young in Italy and still does in multiple Rochester leagues.

What does he love to do as his hobbies, well play soccer all the time and loves to travel! He likes to travel at least once a month, whether it’s Florida or the Bahamas at least for 3 to 4 days; a way to recharge! He also comes to Sicily, Italy at least 3 times a year to visit his mother who is currently 94 years old. He loves to spend as much time with her as he can. “She is actually watching me as I am talking to you,” as he laughs.

I asked him to tell me one strong trait and one trait he wishes he could change about himself. He wanted to start with a weak trait, “I am very stubborn. I wish I could be more flexible, I don’t want to say my way is the highway, but I am very confident in myself. I am strong minded and people depend on me too much.” He says he wants to work on that because he thinks it’s important to have self-recognition.

His strong traits he has; he is a giver. “I give my time, I give my money, I give anything to help them out as long as I see it does good, not bad.” Always giving, always helping. He is not afraid to pull his sleeves and work in the dirt for someone, even as he has done as cleaning one of the highways. He loves bringing his kids to any fundraisers, and having them involved and grow from all these experiences as well.

It was a pleasure getting to know a bit about Enzo. If you are looking for a committed, honest, and high standards of integrity for some of your insurance needs, you have to reach out to Enzo Scollo as he is proud to serve the Rochester area. I will be reaching out to talk about car insurance pretty soon! You should mention you read his article that would put a smile on his face.