When I first started practicing yoga in the early 90’s, the only yoga teachers around were men. It was hard to find any woman teachers during this time. Back in the early 80’s when I was living in the mountains of Idaho, a good friend of mine wanted to teach me yoga but at that time of my life I wasn’t interested, this friend was a guy.

When I first opened my yoga studio in 2000, some of my friends thought I was nuts, I fielded many questions such as; “Why are you opening a yoga studio, who is going to come”, “Yoga is just too weird and only weird guys practice yoga”, along with many other not so encouraging words. Today is a whole different story, there seems to be a new yoga studio popping up every day and most of these studios are owned and operated by women.

So, I wonder with a practice of over 5,000 years that was created by men and for many, many years only practiced by men, where have they gone and why is it a challenge to get men into yoga classes.

According to an article in the MindBodyGreen publication, the writer Patrick Bank had this to say about yoga and men;

“The misconception is that yoga is a lighter form of fitness training, better suited to women, may cause some men to miss out on the health benefits. One reason for this misconception is that yoga has become associated with flexibility rather than strength. However, evidence shows that the mind-body practice can also be very effective in increasing overall strength and building muscle, making it a valuable part of any man’s fitness routine.” 1/15/2017

Bank goes on to add the benefits men can gain from adding a yoga practice into their lives:

From my perspective as a female yoga teacher, I feel that men might feel a bit intimidated, possibly a bit silly, it’s not the ‘manly’ thing to do, but mostly, the fear of peeling some of their layers away and discovering their inner being that has been locked away for so long. The beauty of a yoga class or practice is that it is a self – practice, meaning that you can take yoga as deep as you would like or not. I have many students who come to class once a week, they get a good stretch and a way to clear their mind and then they go on their way till the next week. I have some students who come to class more than once a week and have developed a practice at home, so the possibilities are endless when it comes to yoga.

What I have noticed about the men who do come to classes, they sometimes seem more deeply into the practice than the women. I can see it on their faces and with their non-verbal body language. They take the class/practice seriously and at times do work a bit harder, that’s when I offer the cue of not always feeling the need to push the body. 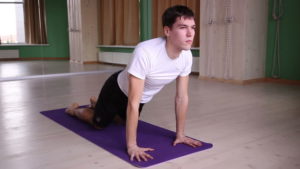 Here are just a few testimonials from some of the male yoga students who attend classes at the studio I own, Molly’s Yoga Corner:

“I have always thought of yoga night as my “mental health” night. You cannot re-hash your work day or anything else in life when you are in most of the poses. Beyond the physicality and as you always remind us, the essence of yoga is training the mind to observe but dis-engage. That is a goal not fostered by other forms of pure exercise. I have a very mentally intensive personality and vocation, so I need every opportunity to learn to take a step back and foster an inner calm.” Bill 57

“Practicing yoga on a regular basis has prolonged this aging athlete’s career.  Bicycling and ice hockey are my staple activities, and flexible/healthy feet, knees and hips are essential.  Yoga, riding and skating allow me to close down the outside world, if only temporarily, to relax, breathe and focus.  The formal class environment and home practice have proven beneficial to both my physical and mental strength.”  Bill 60

“I have been practicing yoga for about 10 years, on advice that it might reduce frequent back aches. I have found that regular weekly lessons, and stretching on my own, have helped my back a lot. Yoga has also allowed me to stay active in other ways. Regular yoga practice makes hiking and cycling easier and more enjoyable.”

“I started going to yoga about 15 years ago as a way to de-stress from modern fast paced life, but also I find it helps with flexibility for my other athletic activities. I’m a dedicated mt biker all year round and a cross-country skier in the winter. At 57, I’m starting to feel those aches and pains we all do as we get older, doing yoga helps alleviate a lot of that. I think it is a great low impact work-out to strengthen my core and upper body muscles, which I don’t get from riding a bike. And it’s a great way to unwind at the end of a busy work day.” Steve

“I began practicing yoga at Molly’s Yoga Corner in Fairport, NY at age 63 to exercise a body that suffered from a sedentary job and increasingly stiff joints. Two back surgeries later, I continue, at age 76, to practice yoga at Molly’s. My yoga teachers sometimes caution me to modify a yoga position but for the most part, I keep up with my younger yoga mates. I attribute my flexibility and reasonably youthful body to yoga. Additionally, my yoga practice has provided me with another set of friends-younger ones who enrich my life.”

“I was introduced to Yoga at the behest of my wife over 10 years ago. I was also going to the Rec Center but only to do the traditional one day cardio and the next day weights. As I was “mid-life”, I was finding it took me ever longer to recover from my regimen. Yoga was not on the male fitness radar back then, but my wife informed me that Molly had a men’s class and suggested (as only a wife can) that I should try it. When the sciatic issues I was trying to ignore disappeared, I was hooked. Now that all manner of athletic teams and the like, have Yoga as a part of their training regimen, the gender lines are gone. I would now think it odd to be in an all- male class, but should warn the reader that any attempts to be “macho” will be quickly dealt with by Yoga. I have gone to Molly’s classes continually ever since and I am now over 70. Yoga is about movement, breath and meditation. For me, Yoga improves my balance and flexibility, eases back and joint pain, seems to help me sleep better, eases stress (though not as much as retiring), and seems to help me deal with the vagaries of life and aging better. Each year when the blood test from my annual physical comes back showing low blood pressure and high HDL my Doctor says, “I don’t know what you are doing, but keep doing it.” For me, Yoga is an essential part.” Geoff 70

In a world that is so fast pace, so much of life is 24/7, trying to keep up with it all, yoga is needed more than ever. Over the 20 years of teaching yoga, I am seeing a resurgence of men coming to classes and men attending teacher trainings to be certified as yoga teachers. Yoga is about balance and Hatha Yoga symbolizes the Sun and the Moon, which correlates to the masculine side of yoga, the sun and the feminine side of yoga, the moon. The practice needs both, men are an important piece of the practice. So, I guess the only question now is, what are you waiting for?

Owner of Molly’s Yoga Corner located on the Erie Canal in Fairport. Molly has been practicing yoga for 25 years and has been teaching yoga for over 20 years. Her studio Molly’s Yoga Corner opened in 2000, which offers an array of different yoga classes meeting the needs for all levels of students. If interested in attending a class visit www.mollysyoga.com for more information, your first class is complimentary so stop on in! 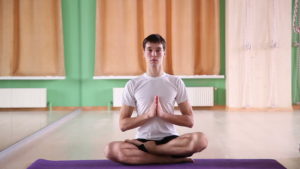