If you know anything about theatre in Rochester, you probably know Rochester Theatre’s own “First Lady,” the beautiful and glorious Diane Chevron.

Dubbed “a local theatre legend” by Rochester’s City Paper, Diane has graced the stage of nearly every Rochester theatre.

Diane is an award winning actor and director, and has played roles from villain to stripper, in performances ranging from high comedy to serious drama.  She spent many years of her career on the road starring in classic musicals and many children’s productions.

Diane has been awarded several TANYS (Theatre Association of New York State) honors for The Queen of Bingo, Save Me a Place at Forest Lawn, Jake’s Women, The Mousetrap, Love Letters and True West among others.

As part of the International High Falls Film Festival, Chevron was in the feature films Signs of Undoing, The Big Bit and Smoking Laws which were screened at the Little Theatre.

Diane was also the female lead in Tug of War, a short film written and directed by local playwright, Laurie Stone, which premiered at the Cinema Theater and went on to the Sundance Festival in Utah.

She has also written, directed and performed in several musical revues and is the co-founder of the cabaret group CITY SIX. 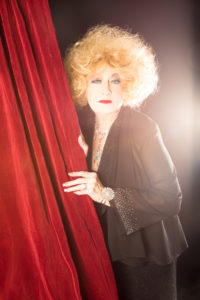 When she is not on stage, Diane is participating in planning fundraising events for various charities.  She has raised millions of dollars to help people in this community.  One of her favorite events is Epilepy/Pralid’s Chocolate Ball.  It started in the late 80’s with Diane and four women who also became her mentors in Charity work, and had what she calls “a crazy idea.”  The event has evolved over the years, but is still going strong.  She was honored at the 25th Anniversary of the event, and she says today being honored at the event is one of her favorite accolades.

She is also passionate about her work with HPA (Helping People with Aids) and now Trillium, which she says is her most rewarding volunteer role.

Diane has traveled extensively so we had to ask about her favorite places.  She says Sydney, Australia, “ranks as one of my top five – the water, the opera, the cosmopolitan feel and the people.  I love Paris because it is ‘The City of Light,’ very romantic with exquisite food.  Bangkok is exciting and beautiful. London is an actor’s dream and Rio is a party!”  (It’s hard to imagine Diane showing up anywhere and the place not turning into a party).

Her friends describe her as a big fish in a small pond, saying she knows ‘everyone who is anyone’ in town.  They say if you want to meet her in person, you might be lucky enough to see her at the Park Avenue Pub.

The current role she is working on is in a 3-person play, The Last Romance by Joe DiPietro.   VARIETY said of the play:  “The boulevard comedy gets a shot in the arm. Remarkably free of cliché…the golden-years love story casts a bewitching spell.  It should enjoy a long life.”   It will open this October.

She is also working on an autobiography, although she jokes that the only people who will read it are those “afraid they are in it.”

Always in a whirlwind of activities, Rochester Woman Online was lucky enough to get Diane for an amazing cover-photo shoot and to get answers to questions about her fascinating life. 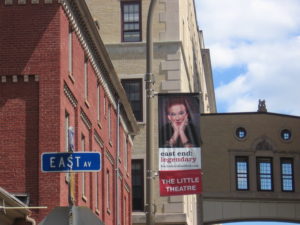 What can you tell us about growing up in Rochester?

It was a gentler time and very much a “neighborhood” based environment which made families closer and more in touch with their neighbors and community.  For me it was a safe, friendly, atmosphere.  PS #36 was walking distance from my home as was Benjamin Franklin High School.  I have many fond memories of both and my formative years there.  I still have friends from school and they always mention the spaghetti dinners my mother would cook and my Halloween parties, but their greatest memory is everyone walking to my house after ice-skating at Carter Playground where my mother had a vat of hot chocolate warming on the stove and home-made cookies waiting for them until they were picked up by their parents.  This continued all through high school.  Downtown Rochester was always magical but especially at Christmas, Sibley’s Christmas Tunnel, Edward’s Train and Breakfast with Santa at McCurdys.  When Midtown Plaza opened, my Senior Ball was the first one ever held there and the first time off campus for my school.  Some of my favorite Rochester places as a child were The Seneca Park Zoo, Red Wing Stadium, the RKO Palace Theatre, Charlotte Beach and Seabreeze, not to mention wonderful scenery and lakes.

Do you remember what your first theatre performance was?

My first “real” stage performance was for dancing school and our recital at The Auditorium Theatre.  I was 4 years old and had a solo tap dance.  It didn’t occur to me to be scared until Miss McCue came up to me as I was practicing my steps in the wings ready to go on and tapped her cane and said, “If you embarrass me, I’ll never forgive you!”  I went out there a never missed a step.  I still her voice every time I walk onto a stage.

What do you love about the theatre?

The experience of thrilling an audience and opening them up to new ideas and experiences.  I love their immediate responses, whatever they are.  I love the collaboration with other actors and directors as well as the support team.  I love starting with a script working through it and developing a character and seeing a production evolve. I particularly like “talk-backs” with the audiences after performances – I think we learn from each other.  Every production is a new adventure, challenge and learning experience. 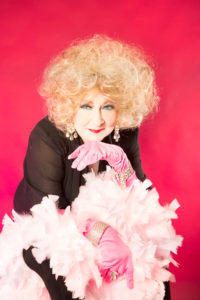 What was the favorite role you performed?

That is very difficult to answer because I have been lucky to play so many varied characters from Shakespeare to Sondheim and everything in between.  Several stand out, however – playing my own Aunt in an award-winning play The Dreamland Bus, written by my playwright cousin, Kenneth Graham. Performing a one-woman show portraying the concert pianist and composer Clara Schumann in The Man at the Piano is Not Here, the stripper Electra in Gypsy, The Bird Woman in Mary Poppins.  One of my absolute favorites was playing Safta in the JCC production of Handle With Care – a true gift, up there with Melissa Gardner in Love Letters. At various ages in my career, I played all three leading roles in Blithe Spirit from the ingénue to the “dotty” Madame Arcati.

What role did you not play that would be your dream?

The role that has always passed me by, usually because of another theatre conflict, is the female lead, Amanda Prynne, in Private Lives by Noel Coward.  Now I am too old to play her.

How did you get into fundraising?

It really started with my parents when I was young.  My sister, Debbie, and I always understood what it meant to be charitable both to people and to the community.  I started Trick or Treating for UNICEF money the first year it started and my Mother gave me my candy at home.  When I was an Auctioneer for the WXXI in my twenties, I met a wonderful man, Will Sprattling, who was the Community Relations Manager at Xerox.  Because of him I learned the right way to go about working on Charity Events, Galas and being a valuable Board Member.  He introduced me to a wonderful group of women and the rest is history!  I have had the pleasure of serving on many Boards and am a lifetime Member of the Rochester City Ballet Board.

How do you feel about being called a Rochester legend?

Ha! Ha!  It feels good! I am humbled and honored.

What are your favorite places in Rochester?

What are you most grateful for?

The love of my family and friends, the respect of my colleagues and the ability to give back to the city I grew up in.

What advice would you give a young person who wanted to pursue acting?

In my lectures and classes on acting, the point I try to drive home is that talent is NOT enough.  It does help, but if you want to be successful in the theatre your reputation is what will see you through and give you longevity in this tough business we call “show”.  There’s no room for prima donnas – male or female – help each other out and keep your nose clean.  I also give a little cautionary advice to be careful in choosing a partner or spouse.  It is sometimes difficult for normal people to “get it”. The strange hours, the time away for rehearsals, the relationships between leading men and leading ladies and processes actors go through.  Contrary to popular opinion this is a serious job that actors need to put time and energy into.  A good actor is always learning and a great actor LISTENS.

I have been so lucky in my life to get to do what I love:  stage shows, movies, commercials, voice-overs and emceeing jobs that my bucket list holds more of the same.  I’d like to stay healthy and keep it up as well as continuing my charity work.  Of course traveling to anywhere I haven’t been is high on that list and one day I’d like to fly a plane.