One week before the inauguration of the 45th President of the United States of America I felt impotent. I was sad because the future of our country seemed bleak. My children and I had been watching the news and talking about how we felt. I reassured my daughters that they can be anything and anyone they want to be. I reminded my son that respect is important and that a good leader has respect for all people. But I wished there was a way we could talk to others who felt the way we did. One of my daughters said she would love to march on Washington, putting the idea in my head! With a few clicks I arranged for lodging and we were all set to go. We could not wait. 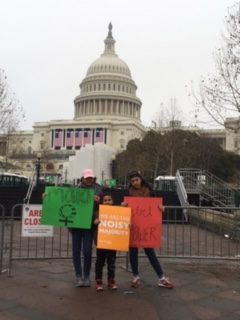 January 21, 2017 proved to be quite a day. My two teenaged daughters, Nayomi and Safia, my seven-year-old son, Justice and I boarded a train to history. We were on our way to Washington, DC. We began to see groups of people wearing pink, “cat ear” hats. Other groups donned same colored shirts, tutus, and other accessories. When we arrived in Washington we were swept by a wave of people; all as enthusiastic and excited as we were. Some chanted, others sang but the message was the same; “we are here!” As we approached the main stage we were showered with signs, stickers and even a pair of those cute pink hats. We later found out that they were called Pussy Hats. The meaning behind the hat depends on who you ask… they are pink cat ears, they also speak to the crude statements about women made by #45. I was touched to see that each one included information about the creator of the hat and why they would have marched had they been able to.

Walking thru the crowd was an experience on its own. We saw and interacted with people from all over the United States and some were even from other countries. Reading the signs people carried was one of the highlights of the day. “I wish I would have thought of that!” I kept saying. Many were clever, others were sad, but I really loved the funny ones. We stood in the crowd from 8:30 a.m. until the march started at around 3:00 p.m. Even though there was hardly any room between each person, everyone was pleasant and helpful towards each other. It was as though we were part of a whole, moving as one. During our wait, we listened to the speakers. I was so excited when Michael Moore and Van Jones spoke. Then there were numerous performers and celebrities. But the real excitement came from the crowd. We were energetic and full of hope and purpose. The speakers incited that in us.

When the march finally began, there were so many people, that the route had to be altered to accommodate the crowd. Every street leading onto Pennsylvania Avenue was bursting with pink hat wearing women, men and children. It was quite a sight! Our feet were sore and our stomachs growled from hunger but we kept on. Signs in hand, we chanted.

On our way back home we reflected on our experience. Nayomi announced that she would like to pursue studies surrounding the Law and Politics. Justice said he loved that people kept saying his name. Safia was fired up about women’s rights. I felt proud to have children who care about others.

So when I am asked; “why did you march?” I say; “for my kids’ future, which includes every issue raised during this march.”