Rochester’s chapters of The National Organization for Women ( NOW) , The New York Civil Liberties Union (NYCLU), Planned Parenthood and Rochester’s Congressional Representative Louise Slaughter came together at a program gearing up for the presidential inauguration and the women’s marches scheduled across the country (the following weekend) to educate and warn of the impeding dangers we all face after Donald Trump takes office. 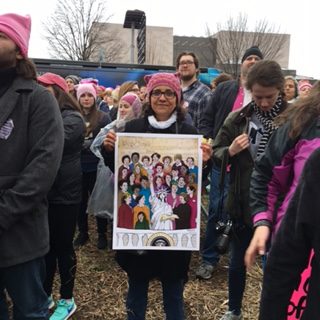 This meeting was packed. It was standing room only. Protesters lined the driveway entering the church protesting the right to life. Myself and staff writer Mary Terese Friel attended the meeting. It was phenomenal to see all of the people ready to stand up.

Our 25th District representative Louise Slaughter said, “When our generation is gone no one will remember the back alleys. There will always be abortion. We want it to be safe, legal and constitutional…We thought we were going to elect the first woman president and break the glass ceiling”.

Louise Slaughter indicated the biggest issue currently is the Supreme Court nomination. When the make-up of the court changes it is a big deal. This can shape the policies and interpretation of law in a negative way.  Landmark decisions such as Roe v. Wade can be reversed. Where would that leave women’s right to choose? The nominee is Neil Gorsuch, Missouri’s Attorney General. He served as a clerk to Chief Justice John Roberts and serves as a judge recently ruling on the Hobby Lobby case (1).

Some people argue Gorsuch is the right fit for the court and others disagree. Democratic legislative members are cautious as Gorsuch doesn’t seem willing to discuss merits of past decisions, judicial philosophy and principle (2). We must take notice his nomination is backed  largely by Conservative groups such as the Federalist Society and  Heritage Foundation (2). 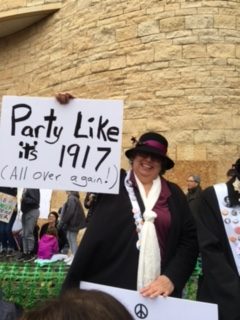 The Defunding of Planned Parenthood

The result of defunding Planned Parenthood and disallowing people on Medicaid from using their services is to prevent some people from obtaining medical care. It was reported that 54% of the individuals live in rural areas where there is no other options. Without Planned Parenthood these people will have to drive extended distances to find medical care.

Marching to Have Our Say

Two of the attendees were headed off to the marches; one to Washington DC and the other to Seneca Falls, NY.

“Why are you going?”

“It’s time to get off my duff and put myself where my mouth is . I am a self-respecting woman and I’m going to stay one. I raised a strong competent daughter and I need to be a role model and I’m doing this on her behalf and mine”.

Deb Bozydaj , is the President of CURE NY, a criminal justice reform group. Deb traveled to Washington DC for the women’s march,   January 21, 2017. Deb indicated estimates for the march stated there were 600,000 women marching. What was most remarkable was the women who attended the march were there for many varying reasons. Deb attended as a woman seeking criminal justice reform .  There were a multitude of issues being represented from immigration to transgender rights to healthcare and other things.

“As we travelled by bus in the wee hours of the morning, the highway was full of hundreds of buses. It was amazing.  To be on the bus,  on my way to be a part of something great, a moment in history.  Everyone on the bus was super charged up to stand together against the Trump administration and the rapid break down of women’s rights.

When we arrived to DC, as we departed our buses at RFK stadium, those of us that walked up to the rally site were greeted by residents of the
row houses we passed. They thanked us for coming to their city. The offered their support, opening stations with coffee, hot chocolate and restrooms. The soldiers from the National Guard station came out to greet us and offered their support and we all thanked them for their service to our country. The police officers beeped their horns in support and also welcomed us to their city. We were not shunned. Everyone wanted us there. There was absolutely no violence or intent of violence amongst the thousands of marchers. There were no police lines. It was just a pure and peaceful enormous gathering of not only women but men too. The people included mothers, fathers, grandparents, children, and disabled people in wheelchairs. There were people there from all walks of life.

Everyone was respectful of each other. It was definitely a movement. It was nothing short of amazing to look up along the route we were marching and see people in the windows of office buildings. They were chanting and supporting too all the way to the white house!

The women’s march touched a lot of people in different ways. It was a great opportunity to participate in history in the making. Women from all walks of life came together as one uniting to “have our say”. We cannot ignore the threat of fundamental rights being stripped away. Families are being destroyed. It is sad to watch the land of the free become not so free. The devaluation of the US constitution cannot be taken lightly. We must stand up and take a stand!