Meteorologist Vanessa Richards of Spectrum News was born on Groundhog Day in Moravia, NY; studied meteorology at SUNY Oswego, lives and works right here in Central New York (CNY), supports local animal welfare shelters, and teaches the next generation of broadcast meteorologists. It’s fair to say she has devoted her life to not only watching the weather and seasons change here in CNY, but also making the region a better place. We couldn’t think of a better set of reasons for her to be our cover story for Central NY Woman Online.

Vanessa knew weather was her passion at a young age. She was about 10 years old when she watched the movie “Twister,” which she was (and still admittedly is) obsessed with. The tornadoes found in this cinematic classic played a huge role in fueling her desire to become a meteorologist. She fulfilled her dream to see a tornado in person when she spent a few weeks in “Tornado Alley” chasing twisters with her fellow classmates from SUNY Oswego. Richards received her bachelor’s degree in meteorology from SUNY Oswego, graduating alongside only three women that year.

When Vanessa began her professional broadcast meteorology career, she was the only female on the team at NBC 3 Action News – now known as CNYCentral. It was her dream to stay in the CNY region, and felt incredibly fortunate to work alongside the very people she grew up watching on the news. After working at the NBC affiliate in Elmira, NY (WETM-18 News); Vanessa was happy to make her way to YNN – now known as Spectrum News. At that point – 10 years ago – more women were beginning to make inroads into the industry.

At Spectrum News, Vanessa wakes up early to provide Spectrum’s viewers the detailed forecast they need to know as they are about to begin their busy days. She typically spends her days in the weather center preparing the forecast, but you can see her out and about in the area as well covering everything from storm damage, to heavy snowfall, to even just having some fun at local parks or sporting events. The local Spectrum News footprint extends across Central New York, the Southern Tier, Mohawk Valley, and North Country.

While Vanessa was always passionate about animal welfare, she became professionally involved in the local animal welfare community three years ago with the launch of her segment on Spectrum News titled “Your New Best Friend.” She and her husband Matt – a former broadcast meteorologist who now works in marketing and communications – currently have four rescue animals themselves, one of which was the first animal to ever be featured on her segment. Over 150 successful adoptions later, Richards continues to host a rotating cast of shelters

on her segment including the CNY SPCA, Helping Hounds Dog Rescue, Second Chance Canine Adoption Shelter, Hunter Hollow Bunny Bed and Breakfast, and more. The shelters bring an adoptable pet to be featured on the segment each week in hopes of finding them their forever home.

When the COVID-19 global pandemic struck, it fundamentally changed how broadcast meteorologists across the country conducted their forecasts. Vanessa was among the many meteorologists to provide a weather forecast from her home. While Spectrum’s newsrooms are uniquely set up to produce quality news and weather reports outside the newsroom with four animals running around the house, she’s happy to be back in the studio. 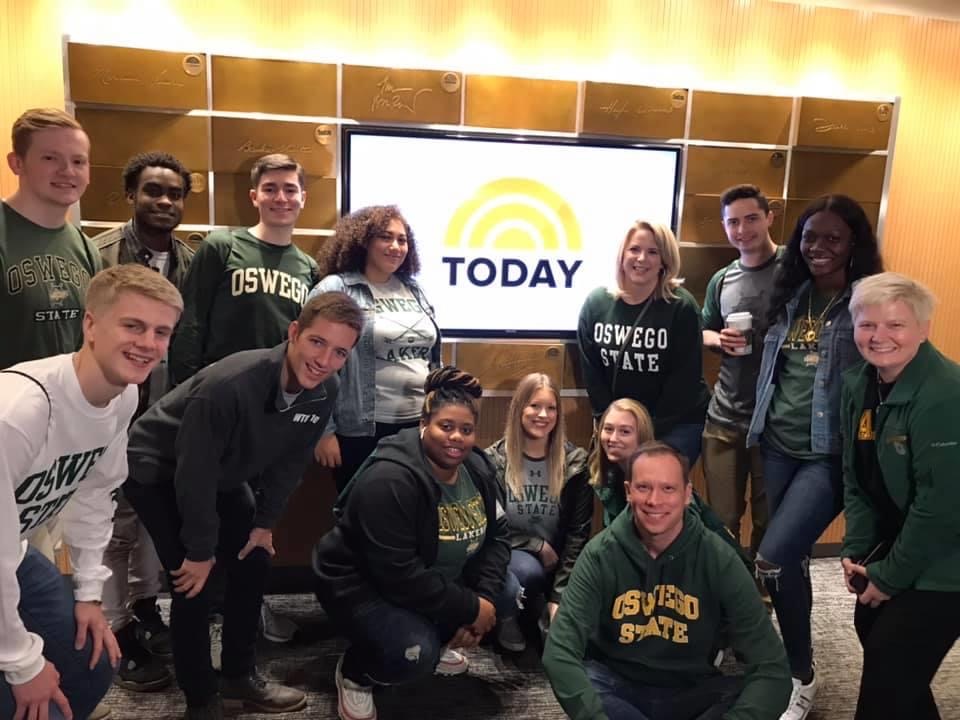 Richards has also taught for five years as an adjunct professor of broadcast meteorology at SUNY Oswego. She teaches the very class she was a student in 13 years ago when former WSYR-TV Chief Meteorologist Dave Eichorn was the adjunct professor. The class – which has 20 spots and is open to Sophomores, Juniors, and Seniors – was initially intimidating to Vanessa. However, the three hour-long night class ended up being one of the best things that has ever happened to her. It has afforded her the opportunity to help people start their careers in the competitive – and quite frankly cutthroat – broadcast television industry, even hiring some of them at Spectrum News. It wasn’t long ago that former WSTM Morning Meteorologist Chris Brandolino took Vanessa under his wing and helped start her career, so Vanessa feels great fulfillment doing the same for others. A recent example of this can be found in former CNYCentral Meteorologist Molly Matott. Richards found her college demo reel on YouTube, knew she was going to be a superstar, and helped her make the right connections locally to kick start her career at a competitor’s station, nonetheless!

One of Vanessa’s career highlights was the opportunity to work with famed TV weatherman Al Roker of NBC’s “Today Show.” Roker – a SUNY Oswego alum himself – reached out to SUNY Oswego to pitch the idea of him teaching a class similar to Vanessa’s. The college decided to create a new class that he and Vanessa would co-teach, along with former WSYR-TV Anchor turned SUNY Oswego professor Michael Riecke. The trio taught students the ins and outs of the current television industry, and where it is heading. Richards, along with Roker and Riecke, truly feel that the future of news revolves heavily around adapting the presentation to be consumed online and via mobile apps. Al and Vanessa remain in touch to this day. In fact, much to the delight of her students, Roker made a surprise Zoom appearance in Vanessa’s broadcast meteorology class this past semester. 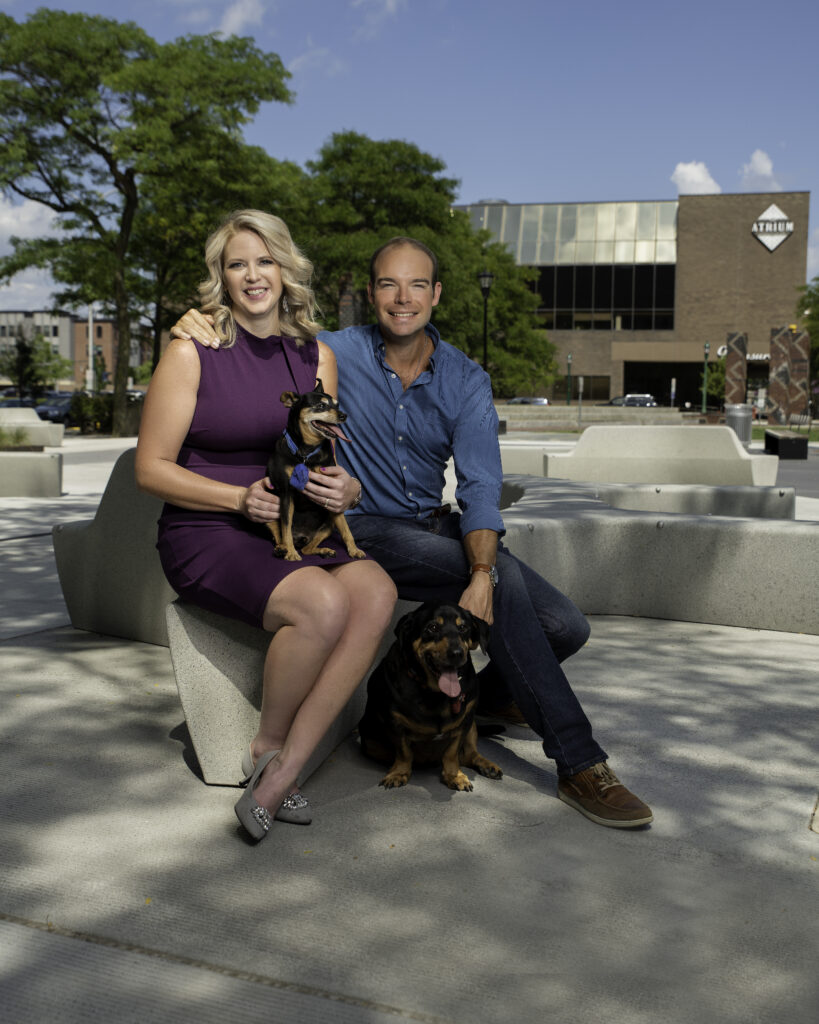 Being from the Finger Lakes, I asked Richards if she has been up to Seneca Falls. She mentioned she loves being close to where the women’s movement started. She found herself in a male-dominated business at the start of her career, which in certain regards, remains that way. While the percentage of female meteorologists in general is increasing, as of this writing, only 8% of chief meteorologists at television stations in the United States are female. Richards says the next goal in her career is to become a chief meteorologist.

When Vanessa is not forecasting the weather for CNY and beyond, she can be found hiking, running, or biking. She and her husband find themselves heading to Delmonico’s as their local go-to favorite restaurant, having celebrated almost every major life event there. Her favorite getaway is right here in our own backyard – the beautiful Finger Lakes Wine Trails! She enjoys spending much of her free time with her husband Matt and their small farm of adopted pets: two cats (Fergie and Stewie) and two dogs (Ralph and Sysco). Be sure to watch for Vanessa’s “Weather on the 1s” reports weekday mornings and her “Your New Best Friend” segments every weekend on Spectrum News.