Forgiveness is the Gift We Give Ourselves

Rebuilding after domestic violence is one of the hardest things a person will ever do. Too many people believe that domestic violence ends instantly once the couple separates and all goes back to normal. I think this is one of the main reasons why people looking in from the outside so often ask the question, “Why doesn’t she/he just leave?” 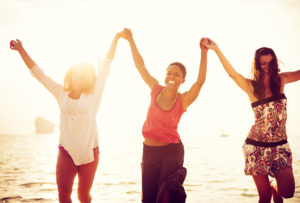 Domestic violence is complicated. No relationship begins without promise and it’s hard to let go of what we once believed we were creating together. It is difficult to explain to people who have only known healthy relationships what domestic violence is really like. A colleague of mine once described domestic violence perpetrators as domestic terrorists. Not the kind we hear about in the news that make bombs and target people they don’t know; but the kind who use their hands, their words, and their actions as weapons to terrorize their partner and their children… often under the guise of love.

Perpetrators are not constantly abusive or violent either, which is why it can be so confusing for victims. In the moments when the perpetrator is feeling secure, they can be loving and endearing, charismatic and charming; and for the victim, those moments offer hope that things are getting better. Perpetrators will also expose their vulnerability to their partners and in these tender moments, the victim is often pulled in and rewarded for extending empathy and compassion. This mixture of good and bad leaves the victim off balance and causes them to constantly question themselves. It is truly crazy making.

Relationships with abusive or violent partners, particularly when the abusive behavior is only beginning to surface, tend to feature amazing highs, contrasted by devastating lows. The time that transpires between the highs and lows is often the key to the victim deciding to make a change.

As the bad times begin to outweigh the good — as they ultimately will — many victims will begin to respond. They may start to think about leaving. They may not understand what’s happening yet, but begin to feel anxious or depressed, which may lead to seeking medical help or to self-medicating behaviors, like over eating, not eating, drinking or recreational drug use. Sometimes the stress victims are living with results in persistent health problems, like migranes, back or neck pain, insomnia, recurring infections or other forms of illness. Sometimes victims even become suicidal and believe that death may be their only way out. This is also when concerns about making a life without their partner, financially and practically, will manifest and can be truly immobilizing.

Finding your way out or through domestic violence is never simple. Aside from the practical considerations, there is the emotional fall out. It is impossible to simply walk out of an abusive or violent relationship without feelings. While every person’s experience is unique to some degree, virtually every victim will experience some combination of fear, rage, betrayal, anger, regret, grief and sadness that are inter-mixed with moments of relief, hope, and even joy.

One of my favorite self help authors, Robert Holden, says that “feelings just want to be felt”. It sounds so simple, doesn’t it? Why then do so many of us go to great lengths to avoid feelings; particularly the negative ones? I don’t have a clinical answer, but I have a hypothesis. I think that we avoid these feelings for fear that we will be devoured by them and because deep down we know that we will emerge from the experience different, forcing us to contend with a new normal. If my hypothesis is correct, it makes our resistance more understandable, doesn’t it?

I have often heard people engaged in a process of personal alchemy, like rebuilding after domestic violence, describe it like an onion. Think about the onion for a moment… a root vegetable, a bulb in fact, that is pungent, adds rich flavor to our food through its layers and layers of flesh and at its base are roots that sustain it. When preparing an onion for use, it has the ability to bring even the most stoic among us to tears. Tears, particularly women’s tears, are cleansing. As we shed them, alone or in the presence of others, we begin peel back the layers that we’ve erected around our broken hearts creating the possibility for something new.

Which brings me to forgiveness, often considered a dirty word in domestic violence work. How do you forgive the unforgiveable? Why should the victim forgive their abuser? Doesn’t that let them off the hook? Isn’t it the abuser that needs to repent and beg for forgiveness? 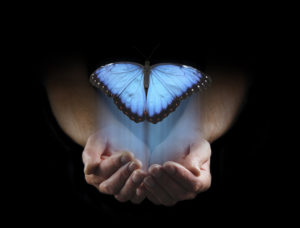 In truth, forgiveness is a gift you give to yourself. It is a choice. It does not absolve your abuser of anything; instead it offers you a path to living in peace and an opportunity to thrive, free from the chains forged by hate, anger, and regret.
For some, forgiveness is about releasing the guilt and shame we felt about things that we did or didn’t do during the abusive relationship. For some, forgiveness is a choice that allows us to release lingering feelings about our partner that prevent us from moving forward. For others, forgiveness is an acknowledgement of our abuser’s brokenness that was the real cause of their violent or abusive behavior. For some, it’s a combination of all these things and more.

Forgiveness is a necessary ingredient in personal alchemy and any fears that arise around it are justified. Choosing to forgive the unforgiveable will undoubtedly change you and how you stand in the world. It will force you to contend with a new normal; and like the caterpillar that enters the chrysalis only to emerge as a butterfly, forgiveness can reward you with wings to fly.