Leticia Ferrer-Rivera can be described in one word: “saucy!” She is the choreographer and producer of An Island in the Desert, an upcoming show at the Memorial Art Gallery on March 18th. Diva 1 has been extended an awesome opportunity to take part in a “behind the scenes” access to the production. Leticia, who is also known in the community as the “Bomba Queen,” was born in Manhattan.

Her parents returned to their native island of Puerto Rico when she was 5 months old. After graduating from the School of Sports, her father was offered a once-in-a-life-time opportunity to study fencing in Paris. Leticia became a world-traveler and now speaks 5 languages, including Spanish, English, Italian, Korean and French.  Seeing the world, allowed Leticia to dream big. When she divorced, she returned to the island and its beloved culture in order to become a folklorist.

Leticia also obtained a Bachelor’s degree in Criminal Justice from the Inter-American University of Puerto Rico. She continued her studies, majoring in Dance, at the Universidad del Turabo.  She enjoyed studying her culture and preserving the folklore associated with it. Leticia was fascinated with the entertainment industry. This passion surfaced from watching her cousin who was a famous comedian, Jose Miguel Agrelot.  Leticia appeared on his television show “Festivalito”. Beginning her modeling career at the age of 16, Leticia attended Fontecha Modeling School (professional and post-graduate) and began working as an Independent Model. She auditioned with the Global Diffusion Modeling Agency for a Fashion Show for L’Oreal du Paris in Venice, Italy.

In 1999, after watching a Bomba class, Leticia knew she would enjoy learning the dance aspect of performing arts. By 2002, she was also Professional Ballroom Dance Instructor for the renowned Arthur Murray Dance Studio.  Leticia competed in many dance competitions and appeared on “Raíces” and “Sábado Gigante”. By 2007, Leticia left Puerto Rico to live in the United States. She is known for bringing Bomba to Western New York.  Her productions include “Bomba Queen Latin-Belly Dance Fusion Show”, “Mariandá the Cultural Clown”, “Bomba Spa” and “Ka-ribbean Fitness”. Leticia’s husband MC Javier Rivera is also in the industry as a DJ.

Bomba is the only survival African Heritage form of music and dance from Puerto Rico. The music developed in the 17th century originating out of slavery in the sugar plantations. The music became a way to express anger, resistance and helplessness for the living conditions but also was a form of recreation and art. “Bailes de Bombas” was a tradition included in baptisms and marriages but also when planning rebellions on the plantations. The right to celebrate was restricted by plantation owners and was only permitted on Sundays and Feasts.

Barriles (rum barrels) were crafted into drums as the instruments used to play the music. There are two types of drums used: (The Primo) Drum which always follows the dancer. There is only one in the group. Or the ( Buleador) which only follows the same rhythm; all the time (from any of the many regional rhythms that can be played during a song).

From the Bula or Buleador, the group can have one drum or as many as they want because they all play simultaneously. The vocals are always verses and chorus (male singers sing the first verse stating the rhythm to be played and the chorus and then the chorus follows). There is not specific attire for enjoying this music and dance genre but some traditional groups use folkloric dresses to represent the 1700’s when the

Part of the movement in the dance involves lifting the skirts while dancing. Competitions arose between the dancers regarding their under-skirts. 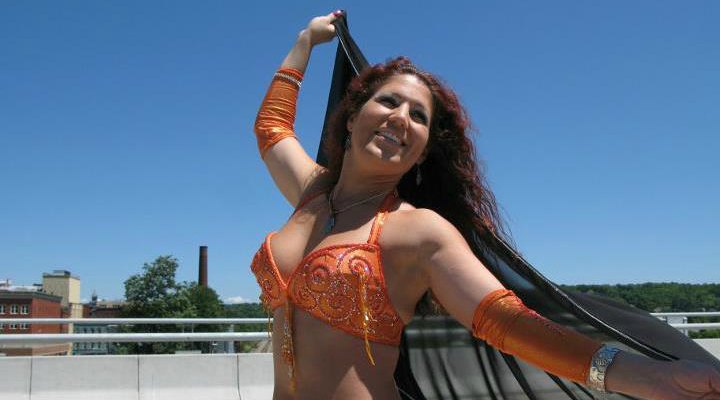 AN ISLAND IN THE DESERT

Watching the camaraderie amongst the performers was by far the most interesting part of being allowed behind the scenes. Rehearsal took place in the basement area of one of the drummer’s homes. The décor including 45’s on the wall gave the room a unique feel. The atmosphere was confortable and inviting. The group seemed more like a family and they truly loved and enjoyed performing, sharing their culture and explaining everything to me as they went along. By the end of the day, I almost felt like I was one of the group as I was welcomed by all.

The show “An Island in the Desert” will be held March 18, 2017, doors opening at 1:00 pm at the Memorial Art Gallery. This will be an enjoyable day where a variety of cultures from the Caribbean and the Mediterranean will be shared, including music and dance. The performers for the show are Leticia Ferrer-Rivera who is the producer, main choreographer and is doing a variety of solos including Belly Dance and some Latin Rhythms.  She is also the Director of the group BombaRoc which is also participating in one part of the show composed by the two lead singers Krystal Noriega and Edgardo Martínez (also a percussionist). José Mora and Enrique Escalera are percussionists.  Daniel de Jesús is performing singing the chorus and the Cuás. Nanni Negrón participates in the chorus and playing the Maraca.  There is a Special Guest Katrina Scott (Kalilah) who is doing a more folkloric style of Belly Dance as well as playing the Darbouka Drum.  Ron Boxx and Tajmel Browne are also part of the dancing crew and partly choreographed some of the Jamaican Dance Hall steps included in one of the pieces of the show.  Last but not least, Javier Rivera will be the MC and DJ of this unique presentation.  Tickets are only available online.

REGULARS
Re-Writing History, One Dance At A Time
Close