FOR A GOOD CAUSE : OLIVIA MORGANTE

My story starts about four years ago when I heard that my friend’s body was in crisis. She is a wife and mother, and just 29 years old. A diabetic since childhood and now in need of an emergency triple bypass surgery. We stood by their family’s side throughout her heart surgery and she miraculously pulled through but was still very much aware that the fight for her health wasn’t over yet. Not only was her heart in trouble, but she was also in need of kidney and pancreas transplants. The next step for her body to be restored to health was receiving a kidney. In August of 2016 she was able to meet all the requirements to be placed on the kidney transplant list.

It was then that I felt God ask me to step up and be her donor.

But, God asked. And with that ask, He gave me an extra dose of bravery.

I brought it up with my husband and assured him that I wasn’t going to offer my kidney unless he was completely on board. He responded: “I was wondering when we’d be having this conversation, because I had a feeling you were going to do this.”

I realized I didn’t even know my blood type or if I was a suitable donor for her. So, I made a call to my doctor and found out that my blood type is A+. (Which meant nothing at the time because I had no idea what type she was.)

So with the full support of my husband and a promise from God that He wouldn’t ask me to do something He hadn’t equipped me to do, I made the call to my friend.

She answered and I went speechless. (I mean, how exactly does one go about offering ones’ kidney?) But I managed to awkwardly offer up my organ. Then it was she who was speechless.

She said she had never expected to get this call.

I nervously asked, “So, what blood type are you?” To which she replied, “I’m A+.”
Immediately, I started crying (happy tears). This was just the first of many miracles to come! 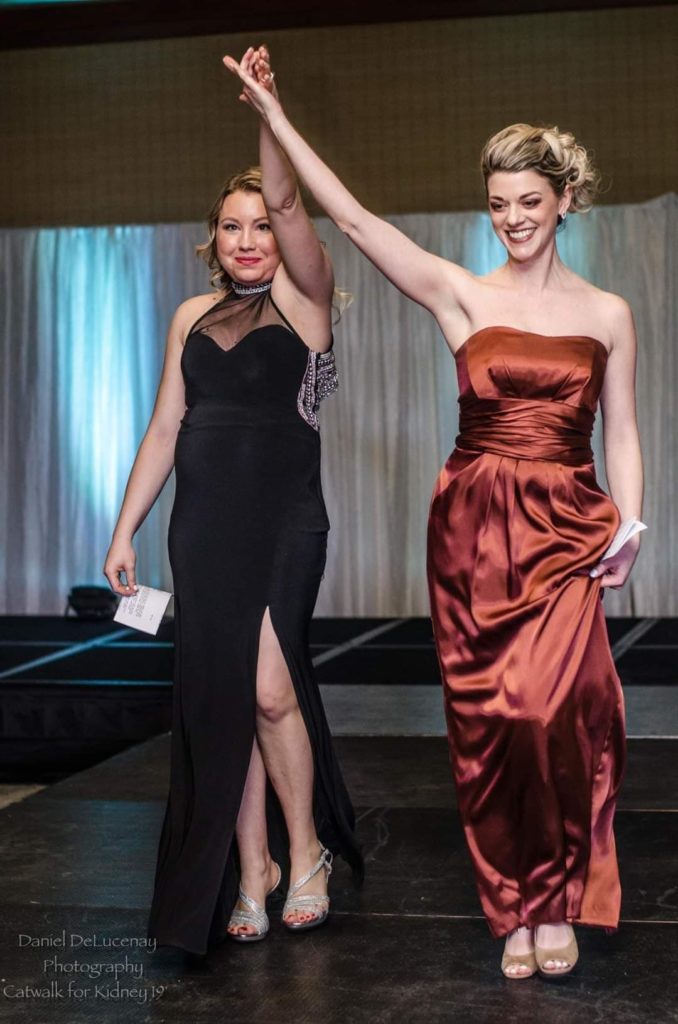 I made the call to the URMC Kidney Transplant Program and let them know I was interested in being a donor and the process began.

Blood work, urinalysis, tissue typing tests, and a two day thorough evaluation at the hospital were all required before continuing in my quest to donate my kidney to my friend. We would anxiously wait for each test result to come back.
One by one, all of the results revealed that before the beginning of time, my body was created for this. My kidney function was measuring at double the average person’s. (I believe the term “super kidneys” was used.) And as far as compatibility with my friend, she and I share four matching antigens. In other words, our bodies are more like siblings than those of no blood relation. Miracle after miracle came in and the whole team sat there in awe at how beautifully orchestrated this whole situation was.
Our surgery was set for November 29th, getting my friend her life saving transplant before needing to go on dialysis.

But then I got a call.

I answered and heard the voice of my transplant coordinator. They were in the middle of a board meeting to review my case and give me the final stamp of approval. She said that something in my blood work from last week looked off and that they needed me to come to the hospital right away for more blood work.
Off I went, confused and anxious about what the hematologist might find. He informed me that he had uncovered some type of platelet disorder and that he could not in good conscience allow me to go through surgery.

The doctors asked me to go off of a supplement I was taking and to come back in two months to have my blood work checked again.

Meanwhile, my friend ended up needing to go through dialysis and having to keep up with the rigorous schedule required. Three times a week she found herself at the treatment center for sessions lasting 4 hours or longer.

Late December I received the call from my kidney transplant coordinator saying that we had been approved by each of the doctors and surgeons involved and we were given a new surgery date of February 8th!

The first surgery, the transplant, went perfectly. I was progressing and healing at an average rate and was discharged after a six day stay. But after a few days of being home, battling fatigue and nauseousness, I called that Friday to let my team know how I had been feeling. At their request, I returned to the hospital and was immediately admitted into the transplant unit. My surgeon stopped by to see me and ordered for blood work, X-ray, and a CT scan to try and narrow down what could be going wrong. Saturday he returned to say that the CT scan revealed “free air” in my abdomen. The primary concern was that I might have a perforation in my intestines. Prior to surgery, my team had listed off every possible side effect and this was among them. However, I had pretty much always been convinced my surgery would certainly be free of any complications and hadn’t thought through that this could be a very real possibility. Unfortunately, the only way to know for sure if there was a perforation, was to reopen my incision and remove my intestines for inspection.

I was desperate to stay away from the operating table and together with my team decided to wait 24 hours. Perhaps the symptoms would change. Perhaps there was a different answer. However, the only change in symptoms was a spike in my fever to 103. After another CT scan, my surgeon sat at the end of my bed that Sunday morning. He compassionately and firmly admitted that he was uncomfortable waiting any longer and that surgery was needed…NOW. He needed to get me into surgery immediately and examine the possibilities. Within fifteen minutes I was headed down to the operating room to get prepped to be opened up, yet again. They used the incision that had just been made twelve days ago and removed and inspected my entire intestine track twice. Miraculously, there were no perforations to be found and they were able to safely close me back up again.

We returned back to our hospital room for another six day stay. After being discharged and home for a week, I returned to the hospital for my one week check up. I met with my surgeon and he said that my incisions look great and that I’m healing up perfectly. He told me that in his twenty years of being a surgeon, I was his first patient he has ever had to reopen for fear of complication. (Aren’t I the lucky one?)

I think about all of the pain I’ve had to endure. All of the mental anguish I had to face knowing that I wasn’t just going to need to heal from one surgery, but from two. I think about the complications and hardships we faced throughout this entire six month process leading up to surgery. And I ask myself, knowing all that I know now, would I do it again?

Was all of this worth it?

And then we ran into my friend who had just finished up a follow-up appointment with her doctor. They had just finished telling her that she is a “rare case to be doing this well”. Her new kidney is functioning at a normal level (which is apparently extremely hard to achieve this soon after transplant). She has lost a total of 19 lbs. She has so much increased energy that she can handle being up and on her feet for hours at a time with no problem. She is no longer chronically cold- her entire body temperature has changed because there’s increased circulation. Her chronic high blood pressure is now normal without medication. She has been able to eliminate eleven blood pressure medications that she has been needing to take for the past year. And she no longer has to live with daily pain and fatigue that kept her from being able to live life to its fullest with her husband and four precious little ones.

At the end of my appointment my surgeon presented me with the Gift of Life Medal of Honor. It was such a humbling experience as he thanked me for my gift and reminded me just how valuable it was. He went on to explain that over 89,000 people with end stage renal disease (kidney failure) die each year. That even though dialysis can be a lifesaving treatment, it’s only temporary. That my friend’s life expectancy would have gone down 20% each year she had to remain on dialysis. That most patients only live 5 to 10 years once starting treatment. 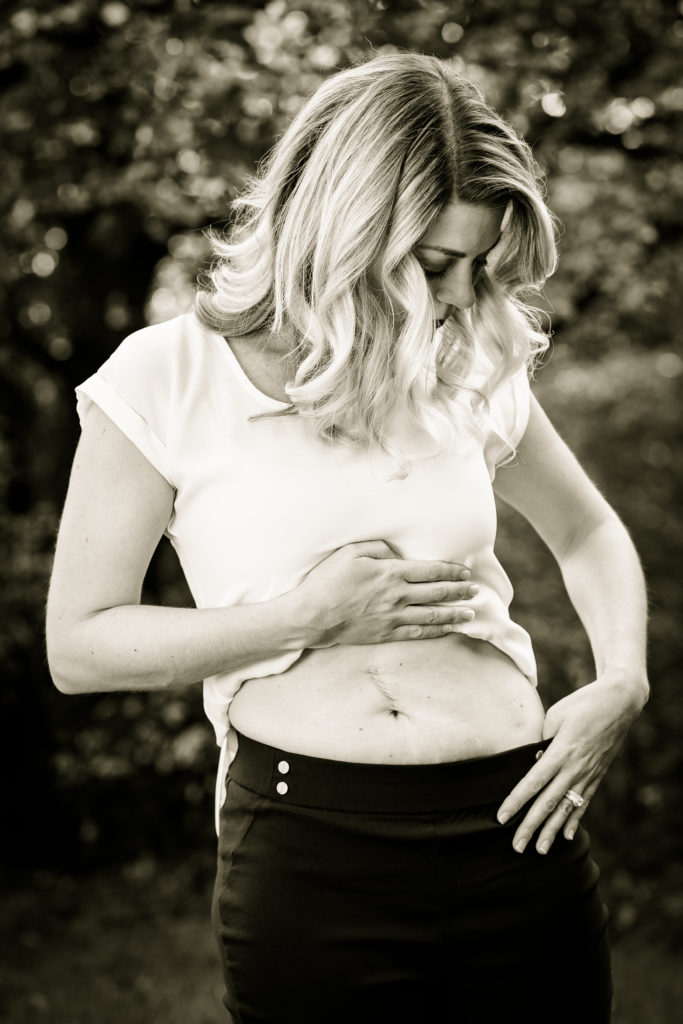 Hearing him so passionately express these startling statistics reminded me that this was absolutely worth it all. Every single moment of it. That there’s no question in my mind that I’d do it all over again even knowing what I know now. This was literally a life giving experience that I will be forever grateful and humbled by the fact that God asked me to be a part of it.

For three years now I have been left with a physical reminder of the gift that God made me brave enough to give. To some it might look like a five-inch-long scar. But to me, it will forever read:
“Great is Your faithfulness.”