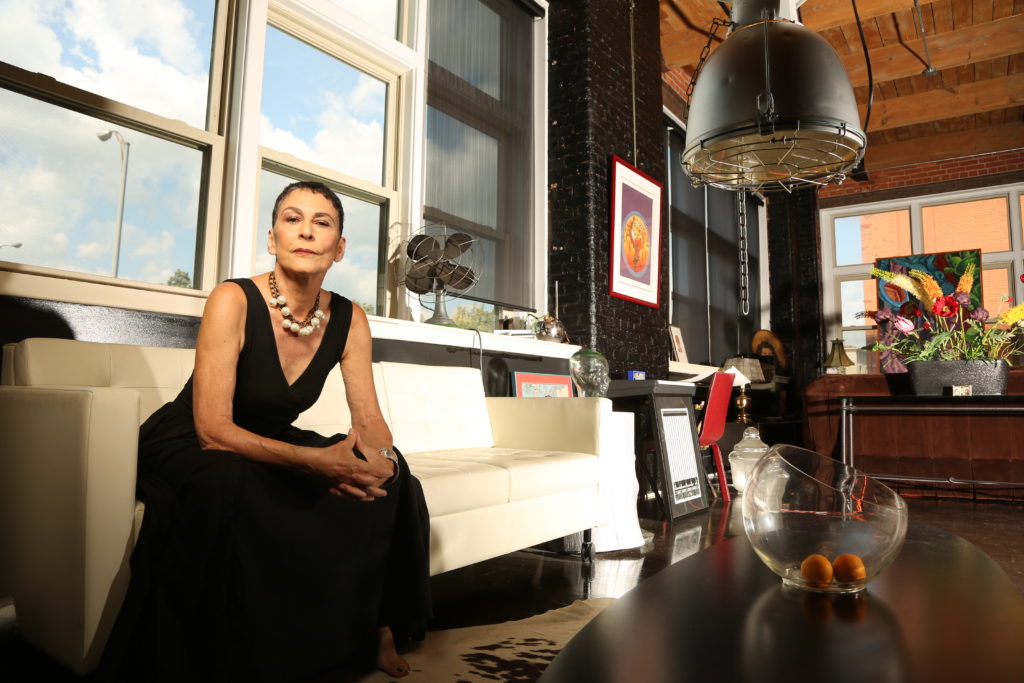 The loft introduces the woman who resides within. We were blown away with the collection of artifacts, eclectic yet modern decor, and honestly just plain cool stuff. Everything down to the glasses that one of our models wore, was all Lucia.

A woman with a view… she is cool, educated and one to be reckoned with. She is an inspiring woman, who helps shape our community by sharing her knowledge as a tenured professor with the students at St. John Fisher College. She earned her PhD in 1998, studying “Learning and Instruction” at the University of Buffalo. Additionally, she holds a Master’s in Science Education and undergraduate work in agriculture. Truly a woman with many faces.

Lucia began teaching in the local school districts prior to her collegiate studies. She loves to participate in giving presentations to assist others in gaining a worldly view and advancing education. A published author, artist and accomplished photographer are also some of her attributes. She shares with us, her favorite project she contributed to was assisting under “The Wilderness Act”  enacted by President Lyndon B. Johnson (1964).

Lucia shares with us that, “The Wilderness Act is known for it’s poetic definition of wilderness. It states, “A wilderness, in contrast with those areas where man and his own works dominate the landscape, is hereby recognized as an area where the earth and its community of life are untrammeled by man, where man himself is a visitor, who does not remain”.

In 1983, an awesome opportunity presented for Lucia, which would launch her career…working for the US Department of Interior, Bureau of Land Management. Assigned out West, in the remote area in Northern Arizona between Utah and the Colorado River, otherwise known as the “Arizona Strip” is where her playground began. Determining the suitability of this land as to whether it met the definition of wilderness was a great honor and beautiful learning experience for Lucia. During this time, job duties included being blessed with travelling through some of the most remote backcountry in the United States. Imagine camping with a friend on the edge of Marble Canyon with no one else in sight as far as could be seen. What a privilege to be part of this project and today the “Grand Wash Cliffs” and “Paiute Wilderness” areas are among Arizona’s protected public lands. Lucia was a part of it! 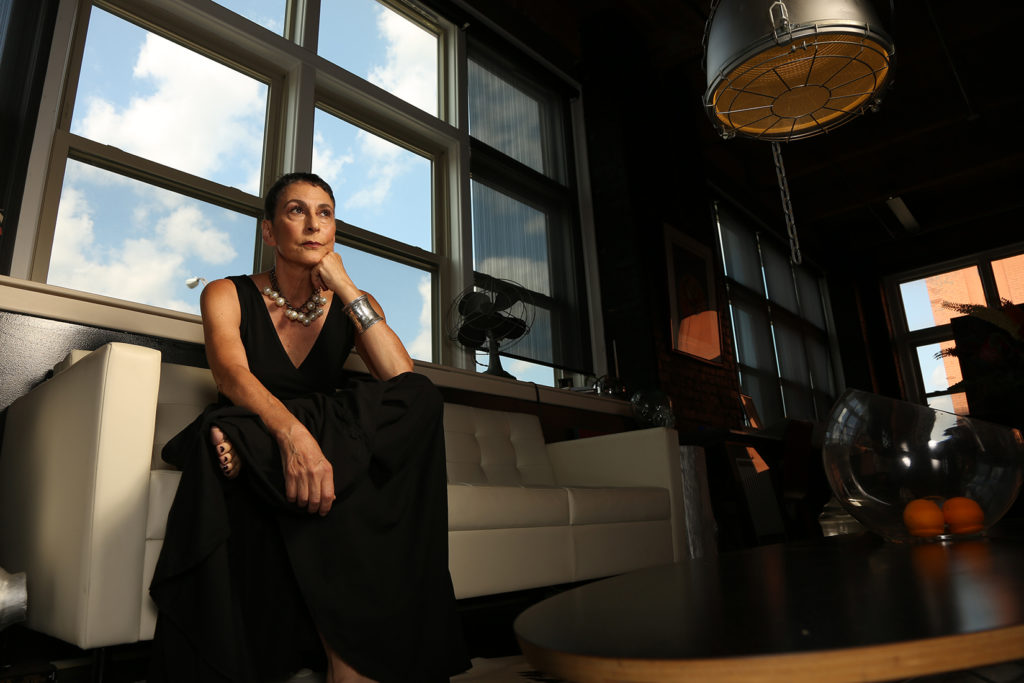 In reflecting for this article, Lucia indicates that her mother was the most influential person in her life. A woman who never realized there was anything she couldn’t do, was a description of Mom. This philosophy rubbed off to the next generation. Lucia faced and overcame ADD to pursue her studies, achieving greatness and then sharing that greatness with the all of students she encounters in her classroom.  While sharing her thoughts with us, Lucia say, “I am very much like that. If I feel like building a dining room table or hiking and backpacking alone, I just do it. I always marveled at people who think some of the things I’ve done in my life are somehow extraordinary. It just doesn’t occur to me to not do what I want. I remember as an adolescent, suddenly thinking everyone was watching me and sitting in judgment of my actions and words. I became withdrawn and afraid of speaking up in class. I tried to become invisible.

This is a common occurrence during early adolescence. It is part of developing abstract thinking. In 1967, the psychologist David Elkind coined the term “imaginary audience” for this phenomenon. Girls struggle to overcome this to a much greater extent than boys. It can produce long-term effects on self- confidence and willingness to speak up and take risks.

I remember the day, I realized quite suddenly, I was incorrect in my assumption my friends were watching me. They were too busy thinking about themselves. At that moment, I felt liberated. The use of social media heightens this sense of being watched. I wish young women understood there is little to be lost and much to be gained by taking the risk to speak up and express their ideas and opinions. Sharing our thoughts with others is one way of participating in the world. Doing so is necessary to develop an understanding of one’s self, a sense of confidence and a healthy self-identity. Young women need to overcome the fear of speaking their mind”.

RWO asked Lucia, as a visionary, how she planned to change the world?
“A year ago, I realized I was at the end of my career after spending a lifetime believing I was part of a movement in science education which would change the way students felt about science, but that my effort and the efforts of others were less than successful. Now after moving past the shock and disillusionment coming with this realization, I can only hope I’ve taught my students to question all that seems to be accepted as normal in society; that there is nothing sacred about the way things are always done. Particularly, when it comes to public education, I hope they understand our nation’s system of education is no longer serving us well.

It is outdated, cumbersome and resistant to changing with the needs of society. I hope my students have the courage to look beneath the surface of the institutions that define us and examine the underlying assumptions and historical foundations on which they were built, and then to participate in effecting change”. 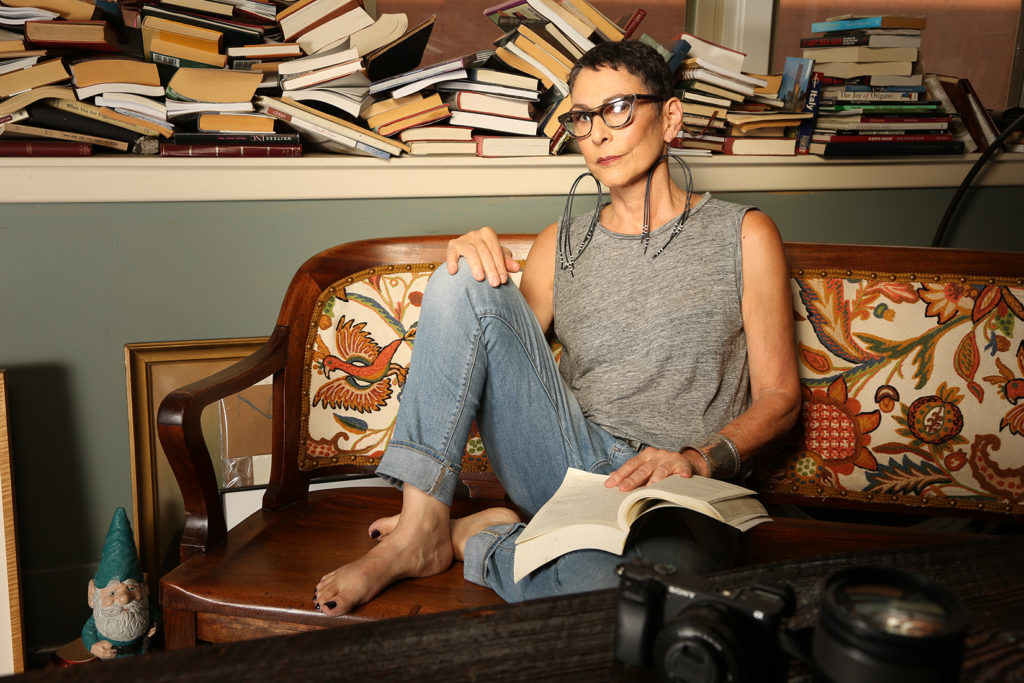 Part of Lucia’s contribution and effort in changing the world, were carried over in her July 2017 exhibit she created using photography/portraiture and quotes from student teacher journals completed while the students were doing internships at the RSCD. This work was intended to show through education, as the individual grows the things they experience become personal. The exhibit was debuted at St. John Fisher College in the Patrick O’Keefe Ross Gallery.

The exhibit seeks to establish through the student’s experiences, they learned a differing view than what they knew prior to experiencing it. The exhibit explores student’s perceptions which include racism and disproportionality at an inner-city school district. The exhibit touches on whether prejudice is the result of adaptation which is out of sync with an ever-changing society. It defines the perceptions of disillusionment and isolation vs. hope and empowerment.

Beyond being a woman with a vision, artist and educator, Lucia is so much more. She is a caretaker to her 84-year-old, developmentally-disabled aunt.

“Aunt Dolly” has no children because she did not marry. Lucia relates to her aunt not having children as she chose not to herself. She cares for her aunt, as there is no one else to do so. She often compares herself to aunt Dolly and wonders what will happen to herself upon aging with no children to oversee her care?

Lucia tells us Dolly’s story:
“Aunt Dolly was the last of ten children. She was born developmentally disabled, which I think was caused by a lack of oxygen at birth. She was different, and people were cruel to her. She managed to graduate from high school at 21. It was torture. She was crowned the prom queen. We think as a joke. My mother loved her so much and worried what would happen to her when she died (she was suffering from pancreatic cancer). So, I went to court to become her guardian and I brought her here from Barnesboro, PA. I did this for my mother, but it has become a central part of my life.

I’ve learned so much about life through my relationship with Dolly. It isn’t always pretty. I’m the bad guy. I must get her to do things that she doesn’t like. For instance, when she came to live with me, she never saw a dentist because she was terrified of dentists. Growing up me and my brother dreaded kisses from Aunt Dolly because her decaying teeth made her breath unbearable. All of her teeth were decayed, and most were broken off at the gumline. The physician I took her to was concerned about her aspirating one of the shards. It was so sad. I can’t imagine the pain she suffered throughout her life as the teeth rotted in her mouth.

I learned as her guardian, I may not be her favorite person but that isn’t important. My role is to make sure she is safe and as heathy as possible, not to be her friend. The word I hear from her most frequently is “ No!” There was a lot of friction between us for a long time and still is because I am the parental figure.

At Atria Senior Living. Dolly fell in love with a man named Ed. Ed was a fabulous man and he loved her so much. She has the mind of a ten-year-old, but she is a woman and she fell in love. When he died it was the first time she mourned the loss of a loved one. When her mother, father and siblings died it was like nothing happened. Life just went on without them. She didn’t mourn, never went to a funeral in her life, but when Ed died, she mourned. It was at this time I saw a part of Dolly I never saw before. When I saw the love that she had for Ed, and the pain she suffered at his loss, I realized that love, loss and pain are essential to the human condition. A hidden part of Dolly found expression through her relationship with Ed. She became more relatable to me. She taught me one has not really lived unless they’ve suffered deep love and loss. 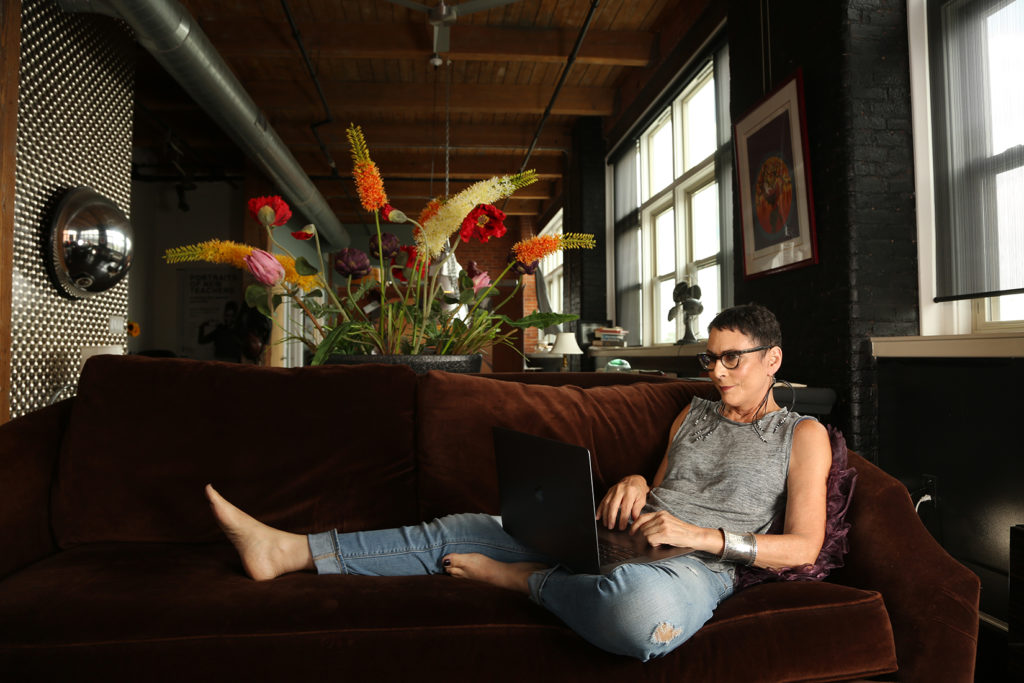 Dolly is very difficult to deal with and requires a level of patience few people have. This is something I need to protect her from as her guardian. The potential for her to be abused is very real. She tears at my every nerve. It is very difficult. I must dig down deep inside myself at times to find the patience she deserves. It is not easy. I don’t always like what I see in myself but at least I do see myself through my interaction with her. I take an honest look at myself every day. She keeps me human.

My ex husband used to call me Nurse Ratchet, you know the nurse in “One Flew Over the Cuckoo’s Nest”. I was the last person who you wanted to have taking care of you. Anyway, caring for Dolly has helped me reflect on myself. I learned what it is to be someone to count on”.

Lucia is definitely and inspiring woman!