THE GIVE BACK: ROLAND WILLIAMS

Roland Williams made it out of Rochester and went all the way to the Super Bowl. He didn’t forget about his hometown. While growing up in the 19th ward, he experienced first-hand the negative residuals of poverty, single-parent homes, trauma and incarceration and saw how these factors destroyed the lives of too many people. As a proud Rochestarian, Roland wanted to make an impact. He himself was a product of the Rochester City School District. So, he came back and started the Champion Academy.

Roland recalls the day he learned he was going to the NFL and called it “A dream come true, one I worked hard for”. Roland loved being a part of it and was most impressed in that he was able to get paid doing something he loved. Roland loved the NFL as it was the vehicle he was fortunate enough to have to escape the confines of poverty. He travelled the world. The NFL was not what every little kid dreams of though, and “All That Glitters Ain’t Gold”. There is the downside of playing this professional sport. There is a high measure of injury.

Roland shares, he himself wished he took better care of his body. He shared he personally experienced head trauma and it impacts him to this day. He supports the current movement regarding warning people of the risks associated with brain injury trauma and the importance of disclosure as a downfall of the job. He wouldn’t change his overall experiences and recalls the Super Bowl experience as being a defining moment in his life for himself and his team. 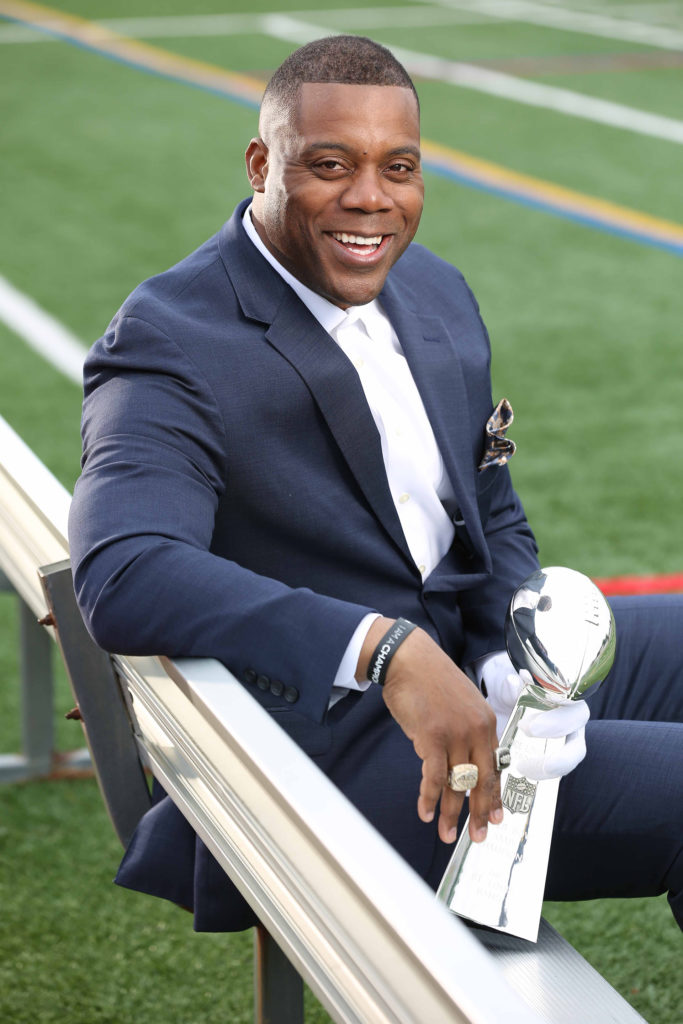 On a more positive note, being a part of the team and learning the tenements of the sport of football also taught Roland valuable life lessons which he brings back and shares with the children who attend his Champion Academy. After seeing the failure and ignorance of a lot of teens in his hometown, he was ashamed of their disrespectful attitudes.

He felt a sadness about their engaging in criminal activity and being charged with petty crimes. It was personally disturbing watching the increase of using violence to solve problems throughout the Rochester community.

Roland wanted to use what he learned in the NFL for something positive. School educators were also sharing stories about their discontent and the lack of work ethics and social skills of the future generation. Friends and family shared stories about increased issues of bullying, gangs and kids engaging in sexual activity in the school and in the streets. Roland feels strongly about changing poverty, education disparities and the affects of trauma.

He is bothered local teens in poverty lack the basic skills and strategies to overcome their traumatic environment. He feels schools are unprepared to handle the numbers of undisciplined and unprepared students. The urban experience provides little hope for the children being educated by a system which is ill-equipped.to address the complex emotional needs the children present with.

In 2015, Roland believed it was time to empower people rising from the most challenged areas so that they can help lead the fight to transform teens in poverty into positive and productive citizens.

The Champion Academy was created to provide participants accountability, consistency and support needed to overcome past obstacles and to maximize their fullest potential. Roland uses the framework he learned in football. The program takes kids in grades 7-12 but they must be referred to the program by a teacher, administrator, police officer or community stakeholder. The program is supported by donors and there is no cost for the students to attend. The program provides a year-long agenda beginning with a summer session in July. The purpose of the Champion Academy is to provide a cost-effective and scalable solution to these problems. The method used here is “Through the use of extreme mentorship and empowerment, the teens will succeed”. So far it seems to be working. To date, the program helped over 300 local teens. The children achieved a higher level of academic success. They also became involved in doing community service which helps to build their character and integrity.

Becoming a father was also a big life-changing experience for Roland. He is the father of three. His father influenced his life and he too wanted to be a living example to his children. While growing up, his father worked at Monroe County Children’s Center and St. Joseph’s Villa, as a corrections counselor.

Roland is living his dream. He used his position he gained through football to do something great in his former community. He loves to describe his experience reflecting on a quote from Muhammad Ali  “Service to others is the rent you pay for your room here on earth”. Roland still runs his football camp but he hopes that this endeavor will do more to uplift his community.