Grace Flores, a mother, a poet, a writer, a producer, an activist, a survivor. Grace keeps it simple. She believes her greatest accomplishment is her daughter, staying alive and remaining positive. Her greatest gift is seeing people smile.  Her smile lights up the room. 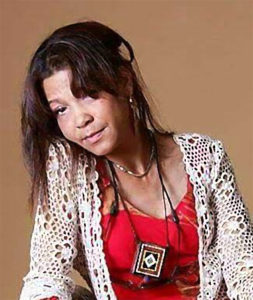 She is a survivor.

Grace lived through experiencing traumatic, childhood rape. She suffered as a Type One diabetic growing up with childhood onset. She is now dependent on dialysis. She survived experiencing domestic violence. As a young woman, she underwent a bilateral mastectomy. She suffered a stroke. She endured broken bones. Her sister and brother were victims of murder. She now suffers from degenerative eye disease and is currently losing her vision. One thing is for sure, no matter what happens, Grace gets back up. She doesn’t let her medical issues or things she herself has endured defeat her.

Grace’s motto is: “Live every moment as if you have two minutes to live. Love hard, work hard, cry hard and dance hard. In the hopes God grants you a soft-landing place, in the hereafter. Dance through the rain” , justgraceflores.

When asked about being a survivor she says, “I refuse to give up. I don’t think that I have gone through anything more than anyone else. This pushes me because if others can do it, I can do it too. Maybe everyone hasn’t gone through as much as me, but I am sure I am not the only one”.

Grace is the director and producer of several plays including “Details in the Water”, Adam From Home”, “The Waiting Room” and “RAPIER Productions”, “Open” and  “Done-Now and Then”. In 2016, Grace received “The All Women Rock” Award, President Obama’s “Volunteer Award” and a special Mayoral Recognition. She supports the arts and her father, is a recognized artist in the Rochester area. Grace often displays his work, as she did in the “Flores Visual and Literary Art Exposition” (2010). In 2010, she was awarded the “Queen of Roc” Award. 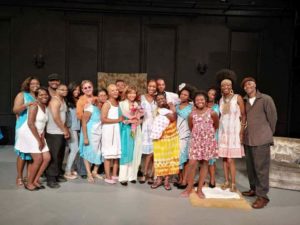 Her current play “Details in the Water” Grace says, “Describes some of the tragedies which occur, when adults do not pay attention. Getting wrapped up in ourselves, sometimes prevents us from being good parents. When this happens, sometimes our children suffer the consequences, where they get lost or taken advantage of in such ways they can’t fully recover 100 % forcing them to become survivors. Some of the issues included are mental illness and child rape”.
Grace Flores, began learning from her parents at a young age, how to be an activist. She was educated thoroughly regarding her history (Black, Latino and European).  The injustices and the truth, nothing was left out. Grace grew up participating in marches with her parents and standing up for the rights of all people. Therefore, she finds it natural to stand up for people and speak out against what she sees as unjust, especially when it involves people who cannot or will not speak up for themselves. Grace loves volunteering with activists, standing up against racism including the new Black Panther Party, NAACP and many other organizations in Rochester.

Grace says, “I don’t really consider myself an activist. I just get involved in what I believe in.

People recover from bad things. Some heal better than others. Grace, survives. No matter what. There is no other option. He poem “Yesterday” says it all.

“Whenever there is a yesterday, that means there is a tomorrow. It’s never over until you say it is over.  Or until the spirits decide it’s over. However, every individual is a great spirit within itself. It is up to us to decide to endure. Yesterday, could never take that from us, but we can try to give it away. It is true others will try, however, the ultimate control is our own. And we must continue to fight for that”.

Grace believes her fourth-grade teacher, Mr. Fogerty was the most influential person in her life. He is the person who taught Grace poetry. She didn’t pick up her pen seriously, while in the fourth grade. That didn’t happen for thirty years. Grace feels writing has given her a freedom of expression she never knew before. She also believes her paternal grandmother was influential.

Grace remembers: “She always had a way of saying things that scared the hell out of me so I listened and obeyed!”

Grace finds satisfaction out of helping others. She enjoys cooking and sharing her culinary skills by rearing exotic meals, which she shares with the community. “Talking to people, and listening is a great skill to have”. By doing this, Grace feels she can help.

Grace shared, “I let people know I have been through way, way, way more than they could ever possibly imagine. Every day is a struggle. However, I’m here. They will get through it too”.

Grace loves to perform. She frequents open mics. She attends mics where the entry age is 18 and up.

Grace does this. Between creating venues to display talent, Grace allows others to share their craft. She loves to do shows with a variety of talent…comedians, rappers, poets and singers. Art shows too! Grace loves to show people they have it in them to create. She often serves as a motivational speaker and is known to take people under her wing and develops their talent to create.

Grace also dabbles in the music industry.
She laughs saying, “The girls in my family don’t have any musical talent, but my father and brothers were extremely talented. They sing and play musical instruments like guitars and drums. I have the ear. I know what is good and what’s not, so I surround myself with singers and musicians. It just feels good. It does the soul good. I offer them the same platform, as I do other creative people in plays, open mics and I refer them to others, I know doing things. 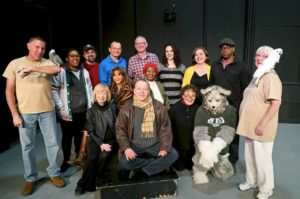 I find the strength to go on, because I know where I come from and I was at one point a very insecure, debilitating, shy person. It took 40 years for me to develop into the person I am today. I had to turn what I go through into something positive. At 52, I feel like I have only begun to really live. I can’t stop now. I’ve only gotten started. So, in spite of all these health challenges, I say to myself every day, I refuse to let anything stop me no matter what. I believe the spirt lives forever and I am just a spirit I will never die”.