NOT YOUR TYPICAL BODYBUILDING CHAMPION

Beth Mandyck is not your typical bodybuilding champion.  When she is not training, working out or competing, she is a Labor and Delivery Nurse at Rochester General Hospital. 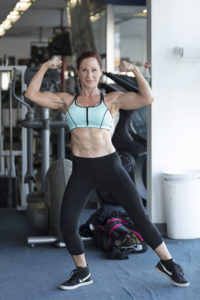 Labor and delivery nurses have the incredible opportunity to guide women and their families through one of the most transformative experiences of their lives – childbirth. Along with providing routine and emergency care to mothers, these nurses are often responsible for the initial stabilization and care of the newborn immediately after birth. The term “labor and delivery (L&D) nurse” does not adequately describe the wide scope of this branch of the nursing profession. L&D nurses must be quick thinkers, good communicators, and rapid assessors to treat unpredictable shifts in the health of mom and baby with compassion and safety. It also requires a great deal of strength and stamina to work as a Labor and Delivery nurse.

In August 2014, Beth felt she was starting to lose both. This led the 55 year old to trainer, Jean-Claude Desaurdouin where she started to tone up and regain some of that lost strength. Over the first six months, she slowly began to see some physical transformation, but what she noticed more was how much better she began to feel.

Why do you do what you do?

The intense training that I do is physically challenging, yet energizing… and it is an amazing stress reducer. As I transform and strengthen my body, it translates into a great feeling of accomplishment. And that feeling spills over into my overall well-being.

How do you train to maintain your body?

Off-season, I train three times a week. When preparing for a competition, I am in the gym four times a week, and occasionally five for an extra cardio session. Outside of the gym, I also work with a posing coach, Shalom Gause. Being a former Ms. Buffalo herself (2009 Bikini Division) — and an experienced veteran of many bodybuilding competitions, she is great partner to have to refine the nuances of form as well as the composition of a routine.

Tell us about your diet?

Whether I am training or not, I try to eat well, which includes lots of vegetables and protein (chicken, turkey and fish), but if I want to have something likes gnocchi and meatballs — my faves — or a piece of pie, I will have it. Moderation is always a good concept. In-season, diet becomes more complicated and when a competition is approaching, it can be very scientific.

At about 4 weeks out, I rely solely on JC to manage my diet on a week-to-week and then day-to-day basis. It is highly individualized because every person’s body responds differently to specific foods or food groups. Typically, it is HIGH protein, HIGH vegetable broken into 6 SMALL meals per day including protein shakes.  I also adhere to a vitamin and supplement regimen to meet my nutritional needs.

Being a nurse presents a number of eating challenges as newborns coming into the world rarely do so on a schedule that allows for meal breaks so I have to be prepared with a food bag and a number of ready options for when I can’t sit down to take a proper meal.

Another definite challenge is how to keep food being interesting when I’m in the second and third month of prep for a competition. At that point, food has been limited for a number of weeks so it can sometimes be relegated to purely being a fuel. As such, I really enjoy talking to other competitors about their food regimen and sharing tips, ingredients and recipes. One of the best that I’ve conjured up on my own is a turkey loaf with zucchini and sweet potato. My husband and I serve it sliced thick on a field of greens with a heavy dose of chili sauce on the side. It is tasty!

Tell us how you got into COMPETITIVE bodybuilding?

I started to go to Glow around 2011 when all of the nurses on my floor decided that we needed some color for a friend’s wedding. They were headed to see Anne Marie DeSalvo for the event so I made an appointment with her. Little did I know how fateful that phone call would be! Anne Marie is the premiere supplier of sunless tanning services to the local bodybuilding world. As such, as we became friends, she kept saying to me that I was a natural and that I should think about competing one day. I told her that I was blessed with good genes but it was NEVER something that I considered nor did I take it seriously.

Fast forward another three and a half years to the spring and summer of 2014 and I find myself regularly working out at the gym where I am being asked by other people what show I was preparing for? They had seen me training hard — with JC, a former NPC National Bodybuilding Champion as well as a Mr. Universe — so they simply assumed that all of that sweat was for a purpose.

Then, in August of 2015 — after being at the gym for about a year —my husband, who is a very goal oriented person, asked me if there was “a goal” to my training. There did NOT need to be, but that kind of quickly turned into a conversation with JC who said, in his patented French lilt, that I could absolutely go on stage.

My first thought was No! It was also my second and third. But then it became Maybe? And within a week, I wrapped my head around the concept and decided to go for it! So, I entered my first competition, the 2015 OCB Eastern USA. It was held at Greece Olympia HS and was promoted by Paul Iatomasi, Sr. Paul and his two sons, Paul and Da. They are bodybuilding legends in the Rochester area and they run some top-notch events.

I was excited and nervous that first time on stage. It wasn’t so much that I wasn’t prepared — because my husband made sure that I was! It was more that everything was new, and I really didn’t know what to expect. Just walking across the stage was a feat. Even so, I won my first trophy that October night. It felt special — and pretty cool — and somewhere inside, it ignited a competitive desire for me to come back and to do better. I have NEVER played a sport or had taken any competitive opportunity seriously in the whole of my 50 plus yeas so this was a completely foreign concept to me, but I embraced it and that drive has served me well in what is now approaching two years — and 6 more competitions — since. 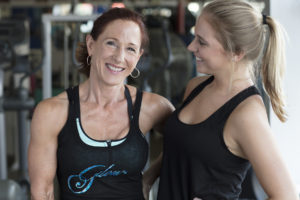 Tell us about your background. How you were brought up? Who were some of  your role models growing up?

I grew up in a large extended Italian family in Endicott, NY. My father worked for IBM. His job took our family overseas on three occasions where I was fortunate enough to live, spending extended time in Germany, France and Switzerland. We travelled extensively while we were in Europe. My parents exposed us to many cultures, languages and foods.

I started taking ballet when I was 4 and I continued up through my high school years. The ballerinas mesmerized me as they danced across the stage. In many ways, I think that although bodybuilding and ballet have little in common in the immediate sense, I think that my approach to the posing requirements and my routine incorporates many of the principles of dance.

Who or what are your biggest inspirations for your life?

My grandmother, Tess, on my father’s side, was an exceptional woman and role model. She raised two children alone while working full time at the Endicott Johnson shoe factory. She was a loving, strong, determined, independent woman who I treasure deeply. She gave me many things, not the least of which are my best recipes! What are some of your professional goals for the future?

As long as I feel good and continue to enjoy competing, I would like to pursue my pro card with the NPC (National Physique Committee). The sport of bodybuilding for women is a small sliver in numbers compared to the men’s side of the equation. As I’ve competed, I’ve met some amazing women who like me, would like to see it grow and thrive. I am not sure (yet) what is needed to make that possible, but it is strongly in my mind. When driving back from Pittsburgh after competing at the recent NPC Masters Nationals, I was thinking that I would like to become a test judge if only to see what it is like to sit on the other side of the table.

Lastly, bodybuilding is an expensive pursuit. That has only become truer as I’ve now moved from local to regional to national venues so I continue to look for sponsorships that make sense for both myself and the sponsoring party. With another national show coming up at the end of August, this is a real pursuit!

What are your three (3) biggest accomplishments?

Obtaining my nursing degree! Ten years of college and three degrees later I finally got it right. For many women, having a child is not an easy process. Such was the case for me so, after some significant hardships, my husband and I welcomed our son 17 years ago this past July. Bill still calls him ‘our miracle baby’. I do believe that he always will.

Being married for 21 years to a fabulous man who spoils me, who cheers loudly for me, who speaks French and Italian to me, who sings (and dances) with me, who laughs with me, and who still frequently surprises me.

If you could not to be doing what you are doing, what other occupation would you

Even though I wear scrubs at work, I have a definite thing for uniforms: from airplane flaggers to hard hats to fireman to policemen to horse jockeys, I’d love to look at trying many jobs, but perhaps only for a day or a week!