The ReDRAGucation of Miss Deelicious

Many of us grew up with the concept of the American Dream. As the daughter and granddaughter of immigrants, the concept was sacrosanct. The belief that every American citizen has a fair chance at success and prosperity through hard work, determination, and initiative. The notion that, through grit and grind, upward socioeconomic mobility lies ahead. How far that dream is from the nightmarish reality. For many, hard work doesn’t always come with the prospect of a better life. 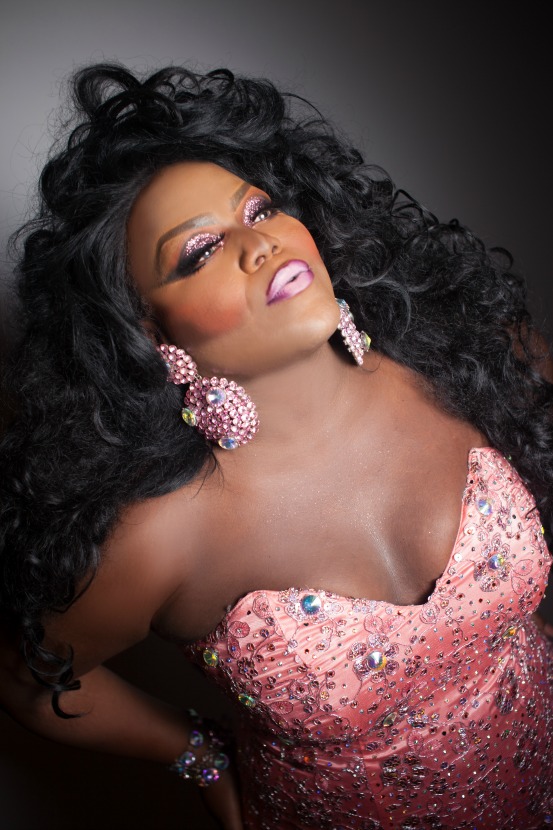 Hard work is just a part of a harder life. Reprieve would sometimes come through our icons. Figures who we looked at from afar, idolized, and inspired us to become the persons we are today. My icons were either real life heroines like Elizabeth I and Joan of Arc, or larger-than-life characters such as Wonder Woman and Carrie Bradshaw. In books, film, and television, these personalities became my role models, the women I aspired to be.

A celebrity in her own right, Kim McEachern – better known as Miss Deelicious – has been a staple in the local drag community for over a decade. I first met her three years ago, when this drag neophyte took the stage for the very first time. She encouraged me in my craft, my aesthetic and, yes, my makeup! But I never knew who she was. I knew few details of her life behind the makeup, costumes and lashes. After begging and pleading with her, Deelicious finally allowed me to interview her. On a cold, wintry day in March, we sat down for coffee at Ugly Duck on a Saturday afternoon. Even after going out the night before, she still decided to get ‘dolled-up’. Her makeup was flawless, her face adorned with a neutral lip and 301 lashes, with a bun sitting atop her head.

Born in 1980s Long Island, Deelicious grew up with her parents and six siblings. Good times were mixed with bad ones. Sibling conviviality turned to rivalry; brothers and sisters started fighting, moving out. Eventually, her parents separated, and Kim moved with her mother to Rochester. It was against this backdrop Kim came into her own person. “I always realized I was different, and always realized I liked boys,” she said with a slight grin on her face. While she ‘came out’ as gay in sixth grade, in middle school she began wearing girl’s clothing and growing out her hair. Hiding the clothes from her mother, she packed them and changed at school.

Hoping to keep it away from her mother, a string of events on one Halloween changed her. Dressed up as her icon ‘Lil Kim, she went out with friends. “I wasn’t going out trick or treating,” Deelicious said, admitting she had been doing so up until her mid-teens. Paths crossed as her sister was leaving their mother’s house; Deelicious’s sister called their mother, who quickly reprimanded her. Thinking right on the spot, however, Deelicious had a good cover. Her mother, however, was not so easily convinced. A week later, all of her girl’s clothing were thrown out and, later, she was forced to cut her hair.

Forced to adapt to the situation, Kim found solace in a local group. Since 1996, The MOCHA Project – Men of Color Health Awareness – has been a staple in the black queer community. Providing resources for HIV/AIDS prevention, they also were a de facto after-school center for many youths in the community. Deelicious’s first time entering there left a great impression on her. Among those who supported her was Fatima, the first transwoman she’d ever met. “She was just so comfortable being herself; there was no shame in her game. She was the ultimate diva!” By random coincidence, Fatima was an acquaintance of Kim’s mother. Through the program, Kim encounter a plethora of individuals in Rochester and Buffalo. It was through MOCHA she regained the confidence to show herself to the world and, at sixteen, truly started living her life.

Beginning her transitioning at sixteen, she identified as a woman. Not only in social circles and general public. It was at this time she started going by the name Kim. She also began experimenting with drag. Her first gig was at GQ (now Tilt) Nightclub. “I felt like I was really around people I could identify with…I thought the queens were like me!” Hosted by Dee Dee Dubois, her first performance impressed the queens. Eventually, she became one of the regular performers at the establishment. But she got a chance to co-host at another bar. Then known as Nasty D’s (140 Alex Bar & Grill), she co-hosted the Salad Bar Revue with Ambrosia Salad. “I just said the most random s**t!” Deelicious chuckled. Co-hosting not only improved her skills but also gained the attention of many audiences. After years of working between both clubs, Deelciious was offered her very own show in early 2010s.

“That was my proudest moment! After all I went through, after fighting to make myself known, the moment I accepted the hosting gig I knew I made it.” For almost five years, Tilt’s Mighty Deelicious Show featured some of the area’s best performers, with local and national talents gracing the stage at Rochester’s best Saturday drag shows. In addition to her show, she remained a fixture at the weekly Tilt-a-Whirl Drag Show, hosted by DuBois, as well as performing at various venues throughout the area. From college shows to private parties, Deelicious became a well-known figure in the drag community. Born out of a desire to be an entertainer, this was a moment of triumph for Miss Deelicious. “Throwing a party. Performing for the people. Doing the damn thing on stage. It’s all I ever known!”

of the highest-paid performers in the city, as well as gaining exposure beyond the LGBTQ community, there were some who envied her success. “I would never say it was a race issue, but there were those who did not like seeing a confident, happy, and successful transwoman of color.” She began noticing the varied reactions of co-workers. What started as slight impasses gradually turned to overt forms of disrespect. “When you get poked at again and again, you can’t just sit there and take it anymore. And I couldn’t.”

After ten years as a performer and hostess, the self-proclaimed ‘Chocolate Brownie’ left Tilt Nightclub in early March of this year. She cites artistic differences between herself and senior management. Despite changes, she was nevertheless flexible. But in recent weeks and months, she felt the show’s direction went contrary to her original concept. “It was about originality, uniqueness. Things were not turning out for the best.” As a transwoman of color, she has been a role model for many in the community. Most especially, for the LGBTQ youth of color.

Growing up, one this is certain: I didn’t have icons who looked like me. Sure, there were few iconic black women in media: Ororo Munroe (X-Men’s Storm), Whoopi Goldberg’s Guinan (Star Trek), and the all-female cast of Living Single. But that was it. And there were no prominent transwomen back in the day. (Ewww. Did I really just use that term? Not cool.) The few I can recollect were secondary characters, often but not always referenced in a comedic fashion. I even remember episodes of Ricki Lake where the audience had to figure out if guests were transgender or not! It was a bit degrading, if not downright embarrassing. Things have certainly changed since my youth. In the past eight years, we have seen the emergence of transwomen celebrities, authors – even politicians. Transsexuality has, in such a short time, shifted from the unknown to be an element of America’s mainstream society. Despite recent attempts to rewind the progress made, transwomen of ordinary and extraordinary qualities are refusing to back down. Nowadays, I don’t have to envision strong, courageous black transwomen of color. I am proud to say I know a few.

“Although my name was on the show, it was more than me. It was one of the few venues drag queens and kings of color could show themselves to the people of Rochester. It gave them a chance to show themselves to the world!” Despite the move, Miss Deelicious is optimistic of what lies ahead. From more shows and appearances, to the possibility of starting her own fashion line. When asked about what the future lies, she paused a looked out of the window. Sipping delicately on her cappuccino, she turned back to me and smiled. “The world is your oyster, love muffin!”

For more information, as well as upcoming events, visit www.missdeelicious.com.