Although there were some hiccups along the way, and people who desired to underestimate me, I nevertheless overcame it all. Vires. Sapientia. Virtus. A motto I learned from my grandfather. Strength, wisdom and courage have helped me along my path. Learning does not end once we walk the stage to receive our diplomas. No matter where you are in life, we’ve all experienced those who look us as the enemy. 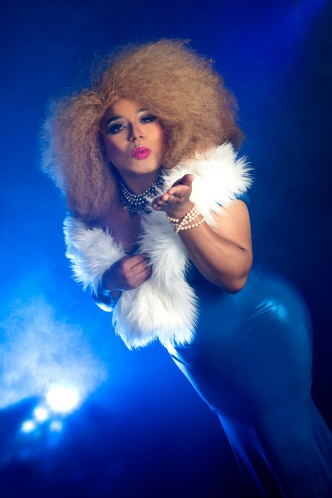 There will always be those that hate, fear, and wish violence upon transgenders, who want to regulate our lives, limit our opportunities, keep us on the periphery of society. But things have changed. In the past eight years alone, we have seen the emergence of prominent figures from the trans community. Icons like Laverne Cox, Janet Mock, and (ugh) Caitlyn Jenner have initiated the discussion – and debate – on trans lives. It has encouraged many to come out and live in their truth. There is nothing more exhilarating or freeing than being completely honest with yourself.

My moment of truth was three years ago. Beyond the lights and stage, drag can be an expression of one’s identity. Indeed, for some in the trans community, it is a stepping stone for transitioning. (However, not all drag queens and kings are trans women and men.) My first time was exciting and nerve-wracking – finding the right wig, choosing the right shoes, shopping for the perfect makeup (MAC Girl since 2014!). While I don’t dance or do splits, my talent as a singer brought me to first-runner up at the local amateur drag competition. Drag, rather than my degree, have opened doors for me.

That same year, I helped Sarah McPike (RWM August’s covergirl) coordinate her show during Fashion Week of Rochester. I’ve gone on to work on social media projects for entertainers, designers, and local businesses. I even coordinated my first drag brunch! Sponsored in part by Rochester Woman Magazine, the Inspired Queens Drag Brunch at the Memorial Art Gallery was a fabulous event. These opportunities gave me the confidence to emerge as the beautiful, elegant and somewhat sassy person I am today. I am and will forever be grateful for those who have been at my side since the beginning. All I can do for those who wish me the worst – who see me as their enemy – is pity them.

Picture this: Friday night cocktails in late-February with my sister.  The weather is fierce, but not too frigid. And I’m just trying to get a Cosmo. After one or two (or three or four) glasses, my eyes began roaming. While observing, women twirling their hair and seductively sipping their cocktails, I frequently became recipient of their cold stares. And I wasn’t the only one; my girlfriend, who is a little more comfortable with public gazing, also took note. Was my nose running? A spill on my gown? I turned to my friend for guidance and, she quipped, it’s because I have something extra down the belt.

Despite a graduate degree and a taste for strong drinks, as a trans woman of color, I am often relegated to one of three archetypes: the sassy, black girlfriend; the queer friend to be doted on, affectionately known as the ‘gay’ best friend (GBF); or, the sexualized being with a few kinks. It’s the last which brings a lot of derision from cisgender women. Will I go out of my way to snatch your gentleman? Will I bat an eye towards your date when if he looks my way? Will I take your husband into the bathroom, expecting him to… appreciate my worth? No. No. And only if he’s paying! Just kidding. All I want to do on a Friday – or any other day which ends in ‘y’ – is enjoy a cocktail at the end of the day.

Ladies, trans women are not the enemy. No doubt there are some, who wish to be the “other woman.” But for many – yes, I’m willing to speak for the masses – we only desire to be respected for who we are and how we live. And, yes, at times, we desire to take a bite of that sweet, delectable apple. What red-blooded American woman doesn’t appreciate a fine-crafted man in a tailored suit? But even when it looks ripe for the picking, we do know the pains of biting into a rotten apple. Apologize in advance if the root of that tree is yours.

My cisgender sisters (may I call you sisters?), all trans women want is to be appreciated. To show up to a party and feel like a princess. To be admired and adored. Every woman – cis or otherwise – understands that. So when a trans sister entesr a room, don’t deride. Value the risk she takes to compose and present herself in a public space – one that isn’t always the safest. Socialize with her, get to know her, and understand the life and love she shows to the world. Don’t try to dim her light. Don’t wish her the worst. She simply wants to celebrate the achievements she has accomplished, and tell the world the accomplishments she desires to achieve. She doesn’t want to be your enemy – but she does want to be a friend and ally.