With her heavyweight status as a Rochester female entrepreneur and auto industry titan, it’s hard to imagine her as anything other than a success. But only decades ago, Kitty was selling used cars on a dirt lot in the front of her Victor home rental. With relentless drive and challenges both ahead and behind her, Kitty Van Bortel, a woman of determination, mother and breast cancer survivor, vowed to do whatever it took to be at the top of the car sales business in Rochester and the greater United States. 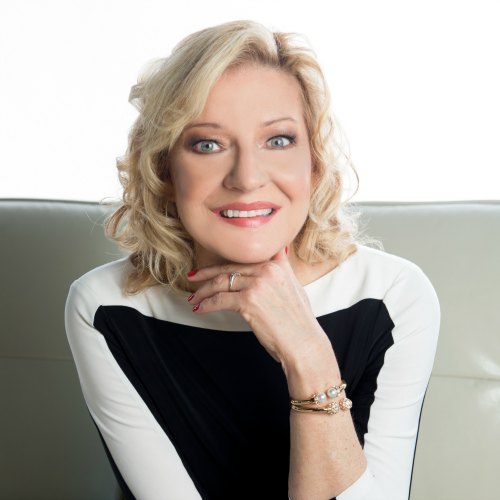 “I gave up everything to make my business work,” she said. But it wasn’t because Kitty loved selling cars or making money. Indeed, these things are as important as the utility of vehicles themselves in our everyday lives. But what Kitty wanted — and still wants — is to help women and the community at large. Since her humble beginnings in 1975, Kitty has used her inexhaustible drive and uncanny sales talent to help empower women on all fronts: whether it’s in the dealership or in the quiet beginnings of their dreams.

Kitty began selling cars in 1975. Growing up, her father was a car dealer, owning up to 17 franchises at one time. Looking for a summer job and vehicle to help her cruise through her last summer as a college student, she applied for a sales position at Ridley Ford in Webster.

Although she received her job on the spot, she was later met with opposition when the sales manager informed her that there had indeed been a mistake. They couldn’t hire her without disrupting the current hierarchy in place at the dealership — namely, she would be the first female salesperson in the history of the dealership.

While sitting here in 2017 such a notion seems far off. But only a few short decades ago, women in sales were scant — particularly in the auto industry. In 1975, women in the auto industry only held administrative positions. In Rochester, there were no women on the front lines selling cars.

But that didn’t make Kitty flinch. At the time, she was attending Welles College, an all-women’s university in the throes of feminist revolution. In addition to her education, Kitty grew up in a household where the sky was the limit.

“I was raised in a household where my mother taught us to fight for what we wanted and to never take no for an answer, so limitations never end crossed my mind.”

Already unshakeable, Kitty asked the hiring manager if she could meet the fellow sales managers and employees at Ridley Ford. If they liked her and voted in her favor, she would be able to assume her offered position in sales that summer.

Of course, Kitty entered the all-male space and as part-anomaly, part-genuine human being, secured her summer job. She went on to become the top salesperson in her short months at the dealership. At the end of her senior year, she was offered a full-time position with Ridley Ford.

These sales skills, on the forefront throughout her illustrious career, are attributed to her keen understanding of others and her proclivity to kindness and curiosity.

“I was always friendly and outgoing, and that made it easier for me to sell cars.”

And as a student of psychology, Kitty had a keen understanding of human behavior and the underpinnings of human desire.

This ability to observe and understand also helped her to recognize the discrimination that was all around her in the world of car sales.

“I noticed that female customers who came into the dealership were often ignored or belittled. And it wasn’t just our customers.”

On the administrative end, Kitty noticed that women who worked within car dealerships were strictly young and attractive, and were soon replaced with other younger, more attractive women as time went on.

As a woman in my mid-twenties, this dystopian, Mad Men-esque world where women had to be voted into their sales positions by an overwhelmingly male team seems far off and quite frankly, absurd. But this was the norm, and at first, Kitty found the antics to be entertaining. As a woman who didn’t take no for an answer, the subtle, misogyny imposed roadblocks seemed to be things Kitty stepped over, unphased.

Her career at Ridley Ford proved to be a springboard to even greater heights in the world of car sales. After a few years making a name for herself, she was offered a sales manager position at Mercedes/BMW. This, to Kitty, seemed like the pinnacle of her young career.

During the 80s, the Mercedes/BMW franchise was one of the most appealing, highly successful franchises to be apart of. And as a sales manager at the franchise, she saw massive success.

“It was an exciting time to be selling cars,” she said.

Eventually, she received an opportunity to become general manager of the dealership. Alongside her in the running was an older male colleague that she had grown to trust as a fellow employee and friend. While he ultimately received the promotion, Kitty continued to work hard and rake in the sales in her original position.

Months later, her friend and now-superior called her into his office. He fired her, and informed her that he would be replacing Kitty with a team of male employees.

“At that point, it wasn’t funny anymore. I had it. And I realized, at that point, there was no way I could work for anyone else.”

While a unconscionable display of discrimination, this setback was to ultimately define Kitty’s career and ignite the fire that led to her numerous successes.

“I learned that in order to move forward, sometimes you have to be willing to take several steps back.”

So to get where she wanted to be, Kitty sold her comfortable home in Brighton for an upstairs rental at a home in Victor, which soon became the sales location for her used car business.

Her remarkable rags to riches tale took off from there. After a few years of making a name for herself, Kitty considered her mission: to help women. And she remembered Subaru.

In addition to Mercedes/BMW, her old employer and friend also managed a local Subaru dealership. Kitty saw great value in Subaru vehicles. At the time, without the availability for hybrids there weren’t many options between often too-large trucks and ultra-expensive Audi Quattros.

“To me, the Subaru was an incredible vehicle for women.”

Recognizing the value of the franchise, Kitty set out to raise the funds to open a Subaru dealership of her own. But this venture, of course, was met with a number of roadblocks. Despite her successes, the banks were reluctant to place their trust in the business, and she was seemingly unable to find the proper funding for the time.

Along the road to success, we meet people who, in their faith and their willingness to recognize the potential of a person or situation, gives us the chance we need to hit the ground running. For Kitty, this person was George Hamlin of Canandaigua National Bank.

While he was able to bring her venture to his board, they initially voted against it. In a last ditch effort, he secured a lunch between Kitty and two of the board members. This was a pivotal moment, one that would decide the fate of her future Subaru dealership.

“I went into the bathroom of the restaurant and looked in the mirror and said to myself: ‘You’ve got an hour to do the best selling job you’ve ever done in your life.’”

Kitty’s present success is a spoiler alert of her triumph during that lunch in and of itself. After securing the financial backing she needed, Kitty was determined to make her Subaru dealership the top distributor in the United States. In 1997, that dream became a reality.

This isn’t the first time someone is telling this story. With a simple Google search, you’ll find countless rehashes of the trials and tribulations of Kitty Van Bortel throughout her incredible career. But for Kitty, what she really wants people to take away from her story is the understanding that as far as success goes — especially for women — there are no limits.

“You have to have clarity of your goals and envision what it would be like to have that success every single day,” she said.

In the throes of Subaru Victor’s success, Kitty looked around one day at the comfortable hum of the sales floor, of the sales managers in their professional dress and the happy customers, and she had a poignant realization.

“I realized that this was it. This was exactly what I had envisioned for my future every night before I went to sleep. From what everyone was wearing to the beautiful cars. I did it.”

And the keys to her success? There are two sides to the coin that brought Kitty to where she is today: empathy and a fierce competitive edge.

“I’ve always been an empathetic person, and I really think that’s made a difference. My life’s work is more about helping others than anything else, and having a kind heart and a larger purpose really takes you where you need to be.”

But her kind heart doesn’t dampen the flame of her tenacity and competitive edge.

“You have to want to win,” she said. “And you have to do whatever it takes to get there, even if it means taking a few steps backwards. No isn’t an option, you can’t let that stop you.”

While discrimination in the workplace isn’t quite as blatant as it was in the 70s and 80s, women still face a number of invisible roadblocks that create the proverbial glass ceiling we are constantly trying to break through.

But if there’s anything, I, a young woman in the beginnings of my career, can glean from Kitty and her remarkable career, it’s that the only thing stronger than that glass ceiling is your own willingness and determination to transcend it.