Happy New Year and a warm welcome to the year 2017!  Speaking of warm, as this issue of the magazine is released, I will most likely be teaching at a School for the Deaf in Hato Mayor, Dominican Republic.

This trip follows my recent visit to Haiti as I worked with the deaf population in that country back in November.  Within two months, I will have experienced and immersed myself in the Island of Hispaniola’s need for further exploration of Deaf Education along with their desperate need for the education of Sign Language Interpreters.  These experiences have led me to see the dire need for education to make lasting changes for life.

As we bask in the American blessings of well established K-12 Schools for the Deaf along with colleges that specialize in Deaf Education such as The National Technical Institute for the Deaf right here in Rochester, NY, which is where I consider myself blessed to have worked for almost ten years; the world around us is not so fortunate.  Being that this was my second trip to Haiti, I was able to reconnect with a few deaf communities that I searched for and found when I was there in January 2014.  My first stop as I made my way out of the capital city of Port au Prince was a community with a localized group of deaf families called, Lapise.  This location is an IDP camp for displaced individuals from the Earthquake of 2010.  Yes, these families are still homeless and living in an area that most Americans would not ever envision calling home.  I along with my colleague, Vance and missionary, Eric Ream invited these folks to a 2-day seminar we were teaching in La Veque.  As we were traveling from the conference with two of these deaf men in the car, we stopped for gas.  Some local men with shotguns stared at us as we pulled up. They noticed we were signing and pointed at the deaf men and said, “ti bebe” which is the Creole word for babies.  In Haiti, all deaf people no matter of age is considered a baby because they aren’t expected to grow up and become successful adults.  My missionary friend looked at the men and said, “Do they look like babies to you?  They are deaf but men just like you. They aren’t babies!”  It was so awesome to see my friend, Eric gain knowledge of deafness as the week went on and he quickly became an advocate for the deaf community.  See what education does for people, deaf or hearing alike!

Now we as Americans gasp at this ignorance of Haitians and say, “What’s wrong with them?! This is 2017!” In fact, in the states, we would label this as oppression of a people group, right?  Please understand that Haitians are good people with good intentions, but lack the education and world knowledge we in America tend to take for granted.  The more I travel and the more I see, I truly believe that education is the key for change anywhere in the world.

In speaking with the Americans who reside in Haiti, foreign aid has done this country a huge disservice.  Instead of educating those who live in the country to be resourceful and self sufficient, we send in aid in various forms of money, food, etc and its expended with a continuous need for more.  For example, organizations with good intentions will bring in meal programs to provide food for those in need, which in turn fools the locals to believe this will be an ongoing privilege, then when the program ends, the locals have quit their jobs and are now dependent on someone else taking care of them.  However, now the people are without employment and starving all over again. It’s a vicious cycle. 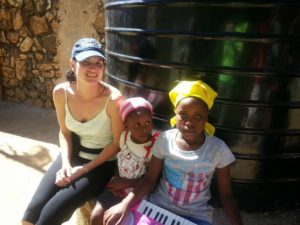 With all the aid money donated to major NGO’s  (Non Governmental Organizations), most of this money is never used to aid the people or teach them to be self-sufficient.  An example of this was in the case of my friend, Gethro who lives in Lapise and was in need of a prosthetic leg due to his loss from the Earthquake.  He waited years for this leg and showed me the certificate that he carries from the Red Cross who helped him.  The problem is, he was fitted for it and used it for a short time, but it rubbed against his thigh and scraped so much that he needs it adjusted before he can wear it again.  There is no one to be found to help him out so the prosthetic is useless.  There are so many stories like this because the health system in that country is nonexistent. Think about Gethro the next time you are frustrated you can’t get in to see the doctor the next day.

The question we should be asking and acting on is this: how do we help these countries in need to leave a lasting impact of change?  It all starts with education.  We need educated people to go and even live amongst these people and guide and teach them in projects such as building wells to sustain communities with water or teaching a trade that will allow a family to survive.

Don’t just bring your food and clothing and give them money.  That doesn’t help them in the long run.  Bring a skill you can teach that will in turn allow them to work and live with integrity.  In sticking with this mindset, my friends Eric and Elisabeth Ream live in Haiti where they coordinate an organization called Kofael which works with women giving them micro loans as they start small businesses that allow them to keep and feed their children.   This program has been successful in Port au Prince where it originated a few years ago and now is helping women in three cities in Haiti. If you feel a desire to help out in other countries, please consider supporting organizations such as this that are truly making a lasting impact for the people of Haiti.

In closing, I encourage you to consider the lasting effects of your financial donations and efforts in foreign countries.  The type of aid we provide can be detrimental in the long run so we have to be intentional about the way we help.  It takes more effort and energy to give the aid that’s necessary but when the people are educated, they are empowered to change generations.

Jill Burress is a full time Speech-Language Pathologist at NTID/RIT along with another full time schedule of “randomness.”  As a pastor’s wife and mother of 2, she is passionate about inspiring women to be the best they can be! Find her on Facebook, Instagram and discovervictory.com.