Beyond Her Sexuality: A Woman of Substance; ROYELLE

As an- up-and-coming, female artist, Royelle recognizes the struggle she faces entering the rap industry. Traditionally, female artists who succeed are over-sexualized and or rise-to-the-top, riding along-side a male counterpart, serving solely as their side-chick and or lover. Women artists become, known most for their body parts before their raw talent as rappers. The reoccurring story line of every music video is boobs before brains. Women dropping it like its hot, twerking derrieres, bouncing up-and-down and again, all for the pleasure of the male counterpart. Where does that leave a talented lesbian female artist? 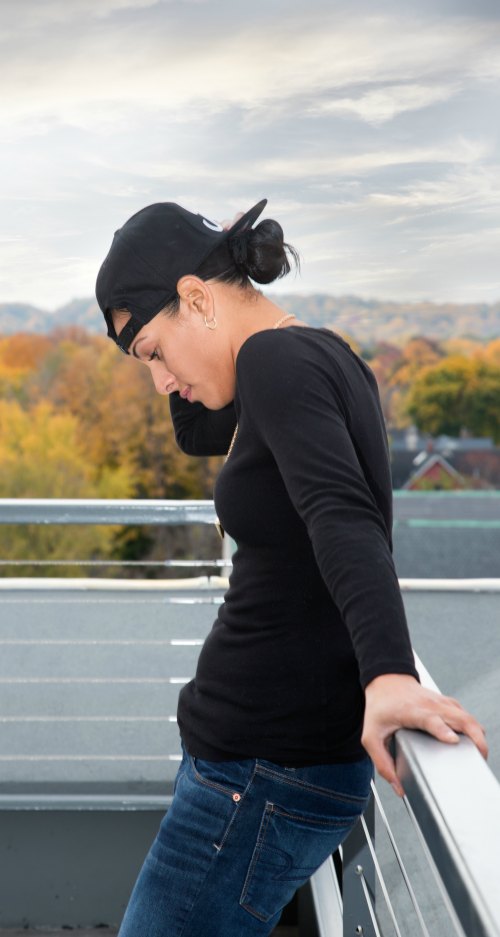 Reality is, most aspiring musicians are forced to pursue separate careers while working on their music part-time. In upstate NY, Royelle’s daily life outside of her music career is spent working her 9-to-5 as a framer (in the male-dominated, construction industry). Being a woman, in this field is hard enough… but also being a lesbian with good looks makes it that much more difficult to ever be taken seriously, much like the rap industry.  We all are familiar with the construction worker watching the woman walk down the street, cat calling and whistling.  For Royelle, whether in the music industry or her day job it’s all the same, the sexualization of women and where does she fit in.

Royelle owns the stage when performing, spitting sassy words such as “Female version of Kenickie  cuz by the end of the night I’ll be leaving you hickeys”. Her hit song   “Bacardi”  is found on I-heart radio, I-Tunes, Amazon, Google Play, Rap City and Spotify etc. Royelle clearly stands out from the everyday underground artist, but she still must grind daily with hopes of trying to capture the attention of a record label executive to finally accomplish a dream she and her mother shared throughout their lives; being signed as an artist.

Royelle’s parents shared a heritage background of Puerto-Rican, Sicilian and Spanish. As early as age 2,  Royelle recalls many days being in the music studio with her mother watching her in the booth, as she recorded songs. Her mother was able to get the attention of a record label, but when forced to choose her record deal or leaving her daughter, she stayed with Royelle, forfeiting her dream. Royelle vows to make her mother’s dream a reality, as she follows in her footsteps.

By age 8, Royelle was penning her own songs. Growing up, she was exposed to a wide variety of different music including classic rock , salsa and pop.  When defining her own music career Royelle developed a love for hip hop. Artists who influenced Royelle included Marc Anthony, Hector Lavoe, Biggie Smalls, Missy Elliott, Jay-Z and Diddy .

Royelle says: “I am ready to re-introduce Hispanic culture as a big force in the Hip-Hop community.” Royelle prides herself in being different, accepting herself as she is and as a role-model for others to do the same thing. One of the most memorable things, while on tour with Royelle was watching the crowd and their response to her aura. No other artist could move the crowd in the same way nor have the response she enjoyed after exiting the stage. Her energy was eclectic.

Growing up in the music industry with an aspiring singer for a mother, who was also a single-parent wasn’t always easy for Royelle.  The family moved around a lot and she attended 15 different schools. Royelle graduated from Corinth High School as the first person achieving a high-school diploma in her family. Royelle prides herself in that she was able to rise above, even when her roots were stemming in poverty in the ghetto of NYC. Her neighborhood was plagued with drugs, crime and destitution.

Royelle decided she didn’t want to remain in this environment and a lot of that stemmed from serving as her mother’s protector from abusive boyfriends in the home. This was ironic because she enjoyed a beautiful relationship with her own father, who loved his daughter but also suffered as a substance abuser.

Royelle, enjoys being feminine in ways although she has an AG style (more dominant partner). She relates in her personal life with mostly male friends.

When on tour, she holds her own and battles on with fierceness. When on stage with the gangsta rappers, she fits right in but considers herself a more commercial artist who is versatile and appreciates and writes all kinds of music for all genres.

“I do not want to be a one-hit- wonder, I want Grammys”. She enjoys being a trendsetter. What is also most impressive is Royelle wants to make a difference in this world. It’s not enough to just leave a legacy of music, but she also wants to do good in her community. Of note is her ability to combine her talent for music to lend a hand when needed.  When her hometown was hit from Hurricane Sandy, Royelle organized a benefit to assist her neighbors. She donated all proceeds to Saint Francis a Church in Queens.

Royelle aspires to introduce her crown logo on a clothing line called R.A.P. standing for Respect All People. She will continue to grind as an independent artist hoping to achieve her and her mom’s dream of becoming the next big thing. People will be hearing a lot more from Royelle as an artist and song-writer for others. She stands above as a woman of substance.

Over the summer, Royelle participated in the Puerto-Rican Day Parade in Manhattan and toured to venues such as Myrtle Beach, South Carolina, Pennsylvania and Rutland, Vermont. In 2012, Royelle was crowned “the best of 518” by Rich Dollaz also of “Love and Hip Hop”. She was the only female artist in the showcase.